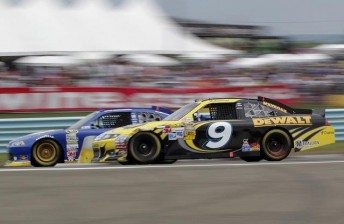 RPM and Chevrolet squad Furniture Row Racing are out-of-contract with their current brands at the end of the season, and were both in discussions with Dodge before the Chrysler Group brand announced its exit.

RPM’s Ford funding has been under a cloud since pre-season when current Dodge outfit Penske Racing confirmed it would switch to the Blue Oval next year.

RPM has won just two races since switching from Dodge to Ford in 2010 – both victories  coming courtesy of Marcos Ambrose at Watkins Glen.

With Toyota (13 cars) and Chevrolet (seven cars) both seemingly content with their current team line-ups, RPM team principal Richard Petty says his squad is hopeful of continuing with Ford funding.

“We’ve got to finish up this year with Ford – we’ve got a contract with them,” he said when asked of the current status of RPM’s manufacturer situation.

“I saw some of the Ford people (after the race at Watkins Glen) and I told them me and Marcos won the race, (and that) I had my contract in my pocket and I was gonna let them sign it right there. I don’t think it went over too good!”

Ford’s motorsport director Jamie Allison was the recipient of Petty’s cheeky antics, and says his company had encouraged the discussions between RPM and Dodge.

“We are talking about making sure they are with us going forward,” said Allison.

“They are with Ford, but I think we both mutually agreed they needed to explore the opportunities.

“We really wanted to make sure that Dodge had opportunities to find great teams, teams that could support their needs on and off the track, and given the history The King had with Dodge, we felt it was appropriate to be transparent on the matter.”

Ambrose, who like Ford is off-contract with RPM at season’s end, says he was personally disappointed at Dodge’s exit.

“RPM is still looking at all their options as far as manufacturers go,” said Ambrose of RPM’s current situation.

“For the sport, Dodge pulling out was not a great thing. It’s been really healthy to have four manufacturers in the sport. As a fan of NASCAR, I’m disappointed that Dodge has taken that choice. I understand it, though.

“For us, we’re building to the future at RPM and I look forward to playing my part and helping them make good choices. It’s exciting times for RPM.”