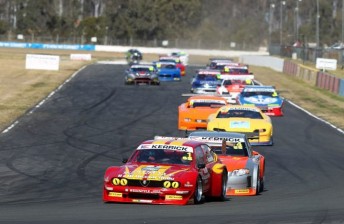 Darren Hossack has taken a clean-sweep of victories in Round 4 of the 2012 Kerrick Sports Sedan Series at Queensland Raceway despite a concerted challenge from traditional rival Tony Ricciardello.

Ricciardello (Alfa GTV) led the opening stages of both 12 lap encounters, but proved unable to hold off the rapid Audi driver.

Kerry Baily minimised the damage to his series lead by recovering from mechanical issues on Saturday to round out the weekend with a pair of third place finishes and an overall podium in his Aston Martin.

Shane Bradford (Camaro) and Phil Crompton (Ford Mustang) took fourth and fifth respectively in both the Sunday races, while further back in the field the regular Sports Sedan attrition took its toll.

Also in action at the Shannons Nationals presented by Hi-Tec Oils today was the Radical Australia Cup, which saw race leaders Peter Johnston and Ed Singleton collide with just two the 50 minutes remaining in Race 2.

Peter White was a subsequently a surprise winner, sweeping past Johnston and Singleton to take his first Radical victory.

Points leader Neale Muston had led for the majority of the race, however a technical issue during his compulsory pit stop saw him drop from the lead and to a 12th place finish. 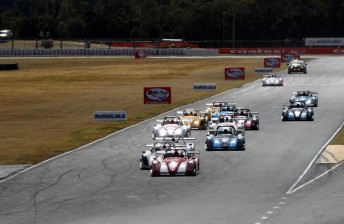 Johnston and Singleton then assumed the top two places, the 2011 winner chasing down Johnston before the pair began a battle for the lead with just ten minutes to go before they came together at turn three with less than two laps remaining. Johnston recovered to finish fifth while Singleton failed to finish.

Simon Haggarty scored enough points across the weekend to win the round ahead of Andrew MacPherson and Richard Bloomfield.

Allan Jarvis won the round in the Hi-Tec Oils Australian Swift Racing series by a solitary point, edging out rival Reece Murphy after both had strong weekends.

Series newcomer Callan Sayers finished third overall – assisted by Damien Ward ending in the gravel in the final corner of the last race while dicing for a podium finish.

There were three different winners from three races in the Dial Before You Dig Australian Saloon Car Series, Matt Shanks and Kane Baxter-Smith both notching their respective first Saloon Car wins today in two action-packed races.

Shanks, however, won the round in his Autorite AU Falcon ahead of fellow Ford drivers Lindsay Kerns and Baker-Smith.