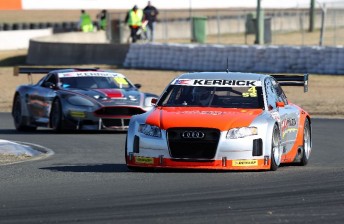 Darren Hossack has taken the opening race of the weekend for the Kerrick Sports Sedan Series at Queensland Raceway on a day where Kerry Baily saw his points lead slashed.

Hossack started from just third position but found himself passing Tony Ricciardello for the lead midway through the second lap.

The order at the front remainder unchanged for the duration – Hossack eventually taking the win 6.4s clear of the Alfa pilot.

The result was enough to see Ricciardello slash his points deficit to Baily from 81 points down to 53 after mechanical dramas took the pole-sitting Aston Martin out of the contest on the formation lap.

Shane Bradford benefited from the drama to finish third in his Camaro ahead of Phil Crompton’s new Ford Mustang and Jeff Barnes’ Pontiac Firebird.

Also in action at the sixth round of the Shannons Nationals presented by Hi-Tec Oils today was the Dial Before you Dig Australian Saloon Car Series, where Simon Tabinor moved to the top of the points standings by winning the first race in his Holden Commodore.

Bevan Garioch – father of V8 Touring Car young guns Justin and Nathan – led the race early before being forced to take a drive-through penalty for a false start.

Tabinor – despite starting eighth – was able to come through to take the flag ahead of Matt Shanks (Falcon AU) and John van Gilst (Falcon AU). Tabinor looks set to take a handy lead into the remainder of the series in the absence of defending series winner Matt Lovell.

The Radical Australia Cup staged their two 10-lap qualifying sprint races today, ahead of their 50-lap feature to be held tomorrow.

Neale Muston held off a fast-finishing Paul Stokell – who will co-drive with Radical newcomer Phil Holzberger tomorrow – to win the opening race, continuing his winning streak that has seen him win three of the four rounds so far this year. He also won the second sprint, after polesitter Peter Johnston stalled at the start and dropped to the bottom of the top ten.

Reece Murphy held out Damien Ward for the win in a close first race of the weekend for the Hi-Tec Oils Australian Swift Racing Series, the pair swapping the lead five times in the nine-lap affair.

The pair dominated the race and swapped positions regularly, but a last-lap move in turn one saw Murphy dive up the inside to take the lead – one he would hold throughout the final lap despite an ambitious late-breaking attempt Ward at turn three saw him draw alongside.

Rob Jarvis held out series rookie Callan Sayer for third – with the pair side by side in the final corner – with defending champion Allan Jarvis fifth.

There was drama, however, when title contender Darren Hossack was hit by Warren McIlveen at turn four, McIlveen’s kart flung into the air. Both drivers walked away from the accident; however Hossack’s 18-point title lead was turned into a two-point deficit going into Sunday.