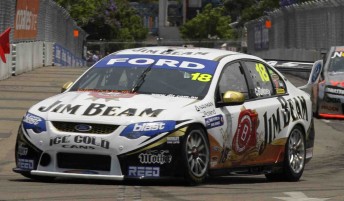 The Ford Falcon FG in which James Courtney won the 2010 V8 Supercars Championship is set to be restored and placed in Dick Johnson’s Race Shop Museum.

The car, formally known as chassis 888-018, spent the 2009 and 2010 seasons in the hands of Courtney before being taken over by the Holden Racing Team bound driver’s replacement James Moffat.

With Moffat now moving to a new chassis for this month’s Sydney Motorsport Park 360, DJR has elected against selling the car, and will instead return it to its 2010 livery.

The car will sit in the museum alongside other historic DJR vehicles from the Group A and V8 Supercars eras.

CLICK HERE for Speedcafe.com’s news story from Tuesday regarding Moffat’s switch to the new car.

See below for Speedcafe.com’s video interview with Dick Johnson about the restoration and Moffat’s new car