Bill Goode reckons he has carried ‘an angel on his shoulder’ during his 81 years.

“In fact she (the angel) has stopped me from being annihilated on several occasions,” he claims.

The Bill Goode story is the stuff movie scripts are based.

But he also carved out quite a successful career as a Speedway racer of some considerable repute during the halcyon days of the dirt track sport through the 1960’s.

Then he gave away the driving and decided to take the plunge into promoting the sport he had excelled at.

It is debatable what Goode is more renowned for – racing, promoting or helping to discover one of the greatest pop, disco and soul bands of the modern era – the Bee Gees.

The Bill Goode story began in inner city Brisbane a short stroll from the city’s Exhibition Grounds on the fringe of the CBD.

“I came from a very religious family so the only place we went to was church,, church and more church,” Goode begins.

“Of course when you get to 11 or 12 years of age and you have to go to church on a Saturday night and there is a Speedway across the road from the church you wag church.

“So with a few of my mates from church we got a look at this Speedway thing and that’s where the sport first entered my head.

“But as I got a little older Speedway went out of my head completely because I had discovered girls.”

Goode always showed entrepreneurial skills and was making decent money while he was still at school running errands for the American troops who were based in suburban Brisbane during WWII.

Speedway would rouse his interest in the early 1950’s around the time Stock Car racing started at Brisbane’s Exhibition Speedway.

“When this started I had a car yard at the time and people started coming into the yard talking about this Stock Car thing so I thought I’d better go and take a look myself.

“The crowds were so immense you couldn’t get into the joint and my family (Goode was married at 18 and had his first child at 19) ended up climbing up on anything they could find to see 25-odd cars turning each other over.”

The following Monday Goode saw a Stock Car for sale in the paper and promptly bought it.

“I went into the Speedway office and nominated for that Saturday night’s racing.

“I was down as a reserve driver the first Saturday and this went on for five weeks or so until I found out what was happening.

“They had 25 cars and they would bring in four reserves in case people hadn’t fixed their cars from the week before.

“Us four reserves were the suckers just sitting there waiting to race.

“So the Speedway office said if you buy a car with a racing number on it then you can get racing. I did that and bought a stock car from Frank Arthur (the original Exhibition Speedway promoter) and went racing the next Saturday and that’s where it started for me as a driver.”

Goode would then move into the open cockpit Speed Cars for the 1955-56 season but, initially at least, hardly set the world on fire.

“I finished last in my first couple of races because I found it a different ball game than driving a Stock Car.

“On the third night they stuck me up the front of the A-Grade field and I finished last of nine cars but I improved and finally got to the stage where I could finally win a race. “By 1959 Frank Arthur built a fence at the Toowoomba Showgrounds so he could run Stock Cars up there.

“I ended up winning a race up there against a stellar field including an American called Dick ‘Jet’ Brown and that was my first real Group One win shall we say.”

In the 1960’s Goode formed a close friendship with the highly successful Blair Shepherd and the pair became fierce rivals on the track.

“Blair bought an Offenhauser off Frank Arthur and he became my toughest rival,” Goode explains.

“I did 14 years of racing and Blair did just over 10 years and we both managed to live through it and we’re very thankful for that.”

Goode had some legendary battles with Shepherd during an era where Speedway was king and major newspapers would send their young cadet journalists to cover meetings as part of their training.

“The first year Jimmy Davies came out from the US he arrived with a little white Offy. Then he arrived the second year with another Offy which I ended up buying off him,” Goode remembers.

“By this time Kev Jefferson (a crowd favorite and Queensland champion) had been killed at the Exhibition Grounds in 1963.

“I had figured the only way I could compete against the ever growing number of Offys was to buy one myself. 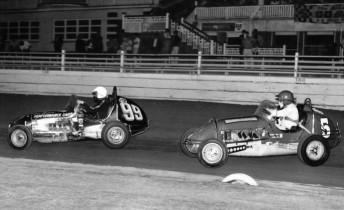 “I then started to win races quite solidly in the Offy.

“Then I went into the Australasian Championship and won it, apparently I was one of the only Aussies to perform on his very first visit to Auckland and nobody else from Australia had won because it had previously been a New Zealander or a Yank.”

Goode would win dozens of races. Among them were the 1969 Australian Grand Prix at the Exhibition Ground, the Golden Fleece 100, the quarter-mile Australian Championship, the Queensland Championship and the Kevin Jefferson Memorial.

Then he quite stumbled into the promotional side of the Speedway by accident.

“I had no intention of becoming a Speedway promoter because I used to see the agony that Frank Arthur went through on the rained out nights.

“He spent good dollars advertising, good dollars bringing in stars particularly if they were overseas stars only to have it washed down the drain if it rained.

“By the late 1960’s Blair Shepherd put in a tender to wrest the management of the Exhibition Speedway from Arthur.

“He came to me and said ‘I want to get this place to promote so I can fill it up with people’.

“I said there is only one way you are going to do it mate because there is no way you will outbid Arthur who has had it since 1946 so I suggested to Blair to see if he can buy in. “I’d become friendly with Arthur over the years because he was involvement in horse racing and so was I.

“Blair and myself got Frank to agree to let us run the promotion of a 100-lapper which was to be the second last night of the season and we rang drivers from all over the country and it was an enormous success.

“Frank let us buy into 25 per cent of his business but he needed final approval from the RNA (Royal National Association).

“Then Blair went to America as he always did in winter. While he was there Frank rang me to arrange a meeting so I went to the RNA to meet them. Afterwards Frank said I’m in and then I went to have lunch with him and he told me there was one problem because the RNA won’t have Blair Shepherd. So here I am being accepted by the RNA to run the Exhibition Speedway which I was really only doing as a stand-in for Blair until he gets back in the country and the RNA won’t have him.

“It was an awful thing. When Blair came back I said to him I’ll just tell Frank I can’t handle this any longer and I’ll sell my shares to you. But Blair said ‘oh no I’m not interested any longer’. I think he was hurt that the RNA wouldn’t have him.

Goode was an ace promoter and presided over the Exhibition for several decades before it eventually succumbed to the competition from the Archerfield Speedway which he also went to help promote for owner Ron Wanless.

NEXT WEEK: Part two of SpeedCafe’s feature on Bill Goode delves into the compelling story behind his involvement in the naming of the Bee Gees and why he didn’t take up a contract to promote the budding young band.