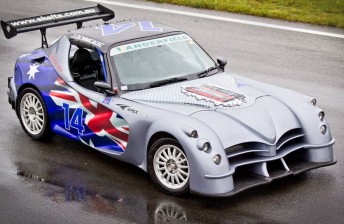 Australian Jeff Denmeade is looking forward to a competitive showing in this weekend’s 90th running of the legendary Pikes Peak Hill Climb after setting the fifth fastest time during qualifying in his Skelta G-Force.

The Australian-made, Honda-powered, sportscar completed the qualifying course in a best time of 4:36.48s to be fifth outright and second in the Open Class.

Former Le Mans winners Romain Dumas was the fastest of all in his Porsche 911 GT3R, some 32s quicker than the Skelta.

With the course fully paved this year for the first time, Denmeade has high hopes for a top placing on Sunday.

“We can come out of this maybe not overly pleased with the result, but very happy with the effort” said Denmeade of his qualifying performance.

“The impressive part is we have given Australia’s Skelta its first ever (class) podium in qualifying at this iconic event – the first for an Australian made vehicle!”

Two days of practice will now precede Sunday’s competition. The event is being run a month later than originally scheduled due to fires in the Colorado Springs area.