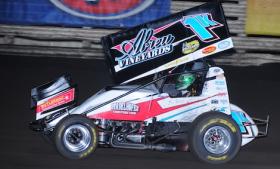 Three of the five Australians nominated for opening night at the 52nd Goodyear Knoxville Nationals made it through to the preliminary A-Main, headed by Brooke Tatnell who finished the opening night encounter in sixth placing. Both he and Kerry Madsen are now locked into Saturday evening’s Championship night program.

After timing in 31st, Tatnell made it to the A-Main through victory in the opening heat. Sitting mid-pack for much of the feature, Tatnell through some shrewd manoeuvres along with attrition to befall other competitors was able to elevate himself to sixth at the drop of the chequers.

Joining him in the A-Main in a solid performance was emerging Sydney racer, Glen Saville. The former karting star avoided the B-Main, directly qualifying after finishing third in his heat. He was able to continue circulating throughout the feature to record a 16th placed finish. He will, however, have to race his way into Saturday night’s competition on Friday after finishing outside the top 16 cutoff.

Kerry Madsen had a solid run going before pulling in at half race distance. By virtue of his heat race win, he locked himself into the bottom half of the top 16 – right behind Tatnell – and is into Saturday night’s competition.

West Australian Trevor Reynolds performed exceptionally to make it into the B-Main, where he crossed the line in 18th position after qualifying 43rd among the 48 strong field, whilst Knoxville regular, Lynton Jeffrey was recorded 19th after timing 22nd.

The A-Main was won by 20-year-old Knoxville Nationals rookie, Kyle Larson – who has a development program position with Chip Ganassi Raing. The Georgia racer has been on a winning streak this week, taking out the non-winged $15,000 to win Ultimate Challenge A-Main at Oskaloosa on Tuesday night and many are tipping he could go on to surprise a few people come Saturday night.

Another youngster, in Davey Heskin was the early race leader and was fairly comfortable in front until the mid-race Safety Car, triggered by Mike Reinke pulling up in turn four. It was at this point where Kerry Madsen pulled infield and out of the race, whilst second placed Randy Hannagan’s engine endured a massive flameout, forcing the veteran to the work area.

Hannagan’s misfortune moved Jason Sides up to second and he didn’t need two invitations to slide past Heskin and take the lead. He looked certain to go on to claim the preliminary victory when his left rear tyre blew with six-and-a-half laps remaining and he rolled out of the race.

When the race resumed, it was Larson leading from Brian Paulus. Paulus triggered a yellow flag when he tagged the turn four wall coming in to receive the white flag, which led to a green-white-chequer finish.

In the end, Larson held on to add a win at the Knoxville Nationals to his Belleville Midget Nationals and Gold Cup Race of Champions trophies from Hesketh, whilst Donny Schatz finished third. Fourth home was Craig Dollansky who transferred from the B-Main and now heads the points and fifth was Lucas Wolfe.

“Getting a win at Knoxville is so big, but it is only prelim night,” said Larson. “It will be a lot better if we can win it on Saturday night, but it will be a whole lot tougher. I think we have a car good enough that we can get up front. It is so cool winning here at Knoxville. I grew up watching these races. This is my first Nationals. I have been racing Sprintcars for six years. I’m glad to be able to run here and I’m glad to be able to win here in my first try.”

The big news is the performance of 12 times Knoxville Nationals Champion, Steve Kinser. Kinser wasn’t able to make it out of the B-Main and is in danger of having to race for his life on Friday night just to try and make it directly into the A-Main come Saturday night. He sits well down the points order at the close of the first night.

Tomorrow, qualifying night two will be held. Officials will be hoping for clear weather conditions – a huge storm that swung through Knoxville just prior to hotlaps threatened the program and put it back by two hours. Australians, James McFadden, Ian Madsen, Jamie Veal and Domain Ramsay will get their first shot at Nationals competition for 2012.

Next Story STP signs on as World of Outlaws Title sponsor