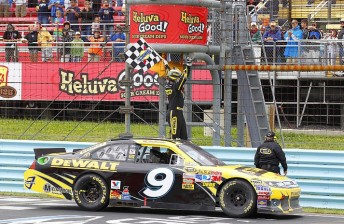 Marcos Ambrose will be gunning for a second consecutive victory at Watkins Glen when the NASCAR Sprint Cup series visits the New York road course this weekend.

The Richard Petty Motorsports Ford driver recorded his maiden win in NASCAR’s top tier at the circuit in 2011 – passing Brad Keselowski’s Penske Racing Dodge for the lead on the penultimate lap.

Despite struggling at the calendar’s other road race at Sonoma earlier this year, Ambrose is optimistic of adding to a remarkable Watkins Glen record that includes four top three finishes from four starts in the Cup series.

“Watkins Glen is one of my favourite race tracks and it’s definitely been good to me in the past,” said Ambrose.

“It will always have a special place in my heart because it’s where I got my first NASCAR Sprint Cup Series win. It’s a track that suits my driving style, and I have a lot of success there in both the Nationwide and Cup Series.

“I have a lot of good memories from our win there last year, and I’m hopeful we can go out and win number two this weekend.

“My team has worked extremely hard the last few weeks and it would be a good shot of momentum for the second half of the season if we could pull off a win this weekend.”

This weekend’s Watkins Glen race is expected to be a more strategically straight-forward race than in previous years with all cars believed to be able to complete the 335 mile race on just two pitstops thanks to the off-season introduction of fuel injection.

Meanwhile, American Porsche specialist Patrick Long is set to make his Sprint Cup debut in Kevin Buckler’s #30 TRG Toyota at Watkins Glen. Long, who has twice competed in the Armor All Gold Coast 600 V8 Supercars event, has one previous Nationwide Series start to his name.