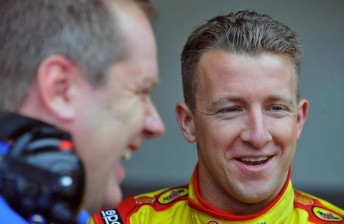 AJ Allmendinger says that it was a prescription ‘energy pill’ called Adderall that caused him to fail a random NASCAR drug test in June.

The 30-year-old has been subsequently suspended indefinitely by NASCAR and released by his former team Penske Racing after both the A and B samples from a test undertaken at the Kentucky Sprint Cup event produced positive readings.

“I got to Kentucky early for a few sponsor commitments and went to hang out with a buddy for a couple of days before we got going,” explained Allmendinger.

“We were out early evening. I hadn’t been sleeping well all season, really, with the way things had been going, obviously, the expectations and everything like that.

“I was really tired, had no energy, nothing. We were out, he had a couple of his friends with him and I was struggling to even stay awake. One of his friends said, ‘oh, I have an energy pill that I take for working out.’

“I didn’t think anything of it because I’ve taken energy supplements for working out, that my trainer gives me, so I didn’t even think about it.

“That was my big mistake, (but) it was nothing crazy, it just gave me a little more energy.”

Allmendinger has recently joined NASCAR’s ‘Road to Recovery’ program designed to assist banned drivers in their quest to be reinstated.