Moffat to get brand-new Falcon for Eastern Creek

Moffat to get brand-new Falcon for Eastern Creek 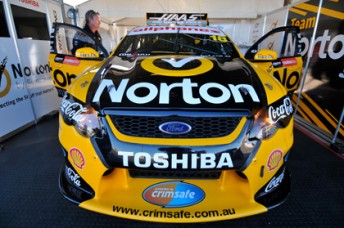 James Moffat will receive a brand-new Falcon for Eastern Creek

James Moffat will become part of V8 Supercars history from Eastern Creek when he debuts the last-ever brand-new chassis to compete under the outgoing V8 Supercars regulations.

The Dick Johnson Racing team has began work on stripping the running gear from Moffat’s current ex-Triple Eight Norton-backed Falcon, where the Queensland team will transfer the internals over to the bare shell that has been kept in its workshop for three years.

The shell, designated 888-021, was sold to DJR at the start of the 2010 season when Triple Eight began its association with Holden.

The chassis Norton Ford will be just the fourth car to make its debut this year, with Stone Brothers Racing, Tekno Autosports and the Holden Racing Team being the only other teams to roll-out new machinery ahead of the 2013 introduction of the Car of the Future.

DJR team manger Richard Swan says that late build of his team’s new car has been implemented for commercial reasons.

“We’re doing it more for a commercial point of view so we don’t end up with a car that has sat there and done nothing,” Swan told Speedcafe.com.

“It also gives James a good crack at that last half of the year.

“There’s no real advantages. It’s more of a physiological boost. It might be slightly better, straighter than what he has now. His current car is three or four years old at the moment, so it might be a little long in the tooth.

“On Monday, we started totally striping his current car, and all of the running gear is being transferred into the new car.”

Moffat has endured a difficult season, currently sitting 26th with a best result of 13th at Townsville last month.

While the new car will be Moffat’s first-ever brand-new V8 Supercar, the Development Series graduate says that he understands the new car is not the only answer to his season struggles.

“It will be nice to have a new chassis, but I’m under no illusions that it’s going to make a huge difference. I know there’s nothing wrong with what I have now,” he told Speedcafe.com.

“It will actually be the first brand-new chassis that I’ve ever had.

“It will be a big job for the boys to get it ready for Eastern Creek. Naturally, I’m excited to be handed the keys to it. It’s a bit unexpected, but I’ll take it and try and make the most of it.”

The team says that it may complete a shakedown test, time permitting, before heading to Sydney Motorsport Park for the August 25-26 event.