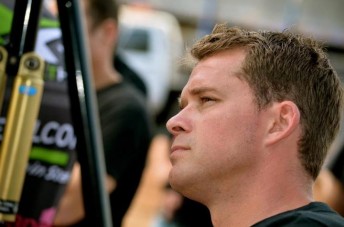 Shane Stewart has completed his third straight victory in the Knoxville 360 Nationals beating home Kevin Swindell and Brady Bacon in a dominant performance.

In taking the win, the Bixby, Oklahoma native became the first four times winner of the 360 Nationals, which is a traditional warm-up for the unofficial World Championship of Sprintcar racing next weekend, the Knoxville Nationals.

Stewart got the lead from the front row into turn number one and then proceeded to open a huge advantage. He caught traffic with 21 laps remaining.

The diminutive driver was masterful through traffic, weaving his way through the backmarkers. At mid-race distance, Kevin Swindell swung around pole-sitter, Roger Crockett to assume second placing.

After starting fourth, Brady Bacon worked his way forward and with a handful of laps remaining was right with Swindell and began challenging him for second placing. He was unable to get around the second generation racer, however ran Swindell right to the finish.

Brooke Tatnell was flying the Australian flag high after yesterday’s sensational preliminary victory. He started eighth, however drifted to 14th at the close of play.

Jamie Veal didn’t line up for his C-Main start.