Loeb fights off Hirvonen to win in Finland

Loeb fights off Hirvonen to win in Finland 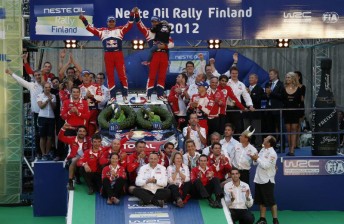 Sebastien Loeb and the Citroen team celebrate in Finland

Sebastien Loeb continues to re-write the record books in the World Rally Championship, winning Rally Finland for the third time and 73rd time in his career.

“For sure it’s very satisfying to win in Finland,” said Loeb.

“I didn’t come here especially to win; I came for points because it’s very difficult to beat the Finnish drivers. It was a great fight with Mikko, a one-two for Citroen and great for the championship.”

Still to taste success for Citroen, Hirvonen praised the Frenchman.

“Sebastien was just faster and congratulations to him,” said Hirvonen.

“Second position in Finland makes it even worse but if you do a perfect rally it is not enough against Sebastien. You have to do more because he is incredible.” 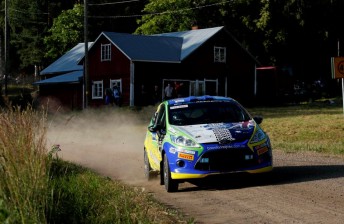 Brendan Reeves is second place in the WRC Academy standings

Jari-Matti Latvala was the leading Ford finisher in third with Petter Solberg fourth in an identical Fiesta RS WRC. It was a frustrating event for the Blue Oval pair, who had been tipped to challenge for victory but ultimately conceded that they didn’t have the speed to beat their Citroen rivals on this occasion.

“We are very happy to be on the podium at the finish,” said Reeves.

“Our outright time was really good. We have consistently improved over the course of the event and have gained some great experience.

“We will go away very happy and confident ahead of the change to Tarmac in Germany.”

Molly Taylor was enjoying the run of her life, fighting for the lead in her category before engine issues with her Citroen DS3T halted her midway through the final leg.

“Gutted to say we’re out,” said Taylor via Twitter.

“Had inherited the lead but limped through stage 15 with engine on 3 cylinders, sadly it’s terminal.

“Has been a great event for us though, learning lots and really enjoying stages. Huge thanks to United Business and BP Racing for the opportunity.”