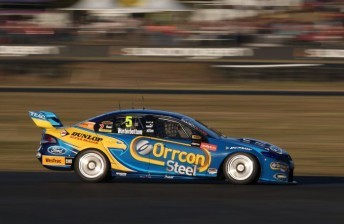 Ford Performance Racing team principal Tim Edwards has vented his frustration with race officials over a lack of blue flags shown to lapped traffic in Race 17 of the V8 Supercars Championship at Queensland Raceway.

Edwards’ driver Mark Winterbottom spent the entire race engaged in battle with eventual winner Craig Lowndes – the dominant pair lapping almost half the field over the course of the 65 laps.

While Lowndes appeared to have the measure of his rival heading into the closing stages, a frustrated Winterbottom lost any chance of mounting a challenge when he was held up by a battle for 16th between Garth Tander and Todd Kelly.

Edwards was left to lament a lack of blue flags being shown to the lapped traffic, criticising the category’s long-used method of issuing the warnings through Race Control.

“If you watch any other category you’ll see blue flags, but as a category we seem to be scared of them,” Edwards told Speedcafe.com.

“Of all races (circuits) this is a very easy one for somebody in race control to look out of the window and see that the leaders are struggling to get passed the lapped traffic.

“It was exaggerated here because the leaders lapped 20 cars, and it was hard work. We’ll never know how it would have worked out if Craig and Frosty were uninterrupted for the last 20 laps.

“They were stuck behind cars fighting for sheep stations in their own worlds. In my opinion it was appalling race direction.”

While Winterbottom denied that the issue changed the outcome of the race, the Orrcon Steel Falcon driver was also angered by the situation.

“I have raised it a few times before in drivers’ briefings but they (the officials) just shrug it off.

“There were guys banging doors with you while they raced their own race, but if there are no blue flags then they have every right to hold their line.”

Chairman of Stewards for the V8 Supercars Championship, Steve Chopping, confirmed to Speedcafe.com that Race Control was “aware of the criticism”, but underlined that normal procedure was followed in today’s race.

“The blue flags are not a warning to the car being caught that he is being caught, it’s a statement to him that he hasn’t fulfilled his obligation to let the faster car passed,” explained Chopping.

“Over time there has been an expectation by drivers that, as soon as they see the car ahead of them, the driver should get the blue flag. But it’s really only for when the car ahead doesn’t yield at the first possible opportunity.”

Chopping confirmed that the only blue flag of the race was issued to Todd Kelly for his part in the late drama.

When asked for his opinion on the matter, TeamVodafone managing director Roland Dane suggested that the way the flags are used should be altered.

“We probably need to anticipate better and tell people whether they are expected to get out of the way if there’s a tight battle,” said Dane.

“The idea is to keep it as fair as possible and have a good, clean race.

“At the end of the day it ebbed and flowed a bit today, but Frosty probably didn’t get quite the rub of the green that Craig did. So I’d encourage a bit more anticipation when it comes to using the blue flags.”