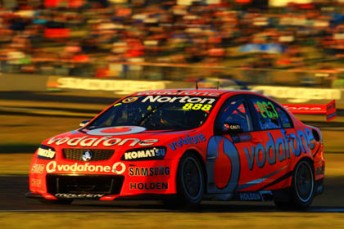 Craig Lowndes has completed his domination of the 2012 Coates Hire Ipswich 300 by winning a processional Race 17 of the V8 Supercars Championship.

Lowndes took the lead from early front-runner Mark Winterbottom on the sixth of the 65 laps and was only headed during the pitstop cycles for the remainder.

The win is Lowndes’ fifth consecutive at Queensland Raceway and his third of the 2012 season. Additionally, TeamVodafone has now swept the last six races across the Hidden Valley, Townsville and Queensland Raceway events following a seven race streak from FPR.

Although Race 17 ran Safety Car-free for its entire distance, Winterbottom crossed the line just 2.0s behind Lowndes in second place.

Lowndes and Winterbottom spent much of the last 20 laps dealing with lapped traffic. The TeamVodafone driver lapped all cars up to the 14th placed James Courtney by the chequered flag, such was his domination.

TeamVodafone and FPR ran identical strategies on its two cars, with the leading pair pitting together on Laps 9 and 38. The pursuing Whincup and Davison visited the lane one lap later on each occasion, but neither had the pace of their team-mates.

Pole-sitter Davison found himself squeezed out by fellow front-row starter Winterbottom heading into the first corner, before quickly losing places to Lowndes, Whincup and Ingall during the short hard tyre stint. The Trading Post FPR Falcon driver recovered to fourth in the first pitstop cycle, but spent the remaining laps struggling for car balance.

Jonathon Webb and Lee Holdsworth were the race’s only retirements – the pair both pitting late in the going with mechanical issues. Holdsworth struggled with a sticking throttle for much of the race, an issue that eventually resulted in a fire within the IRWIN Ford.

An early puncture ensured a poor day for the ill David Reynolds, who was the last finisher in 26th.

Rick Kelly fared just one place better after a strategic error necessitated a third pitstop for fuel in the waning laps.

Kelly’s team-mate Jacques Villeneuve saw his race come apart on the opening lap, when a touch from David Wall exiting Turn 6 sent the Pepsi Max Holden spinning across the infield.

The championship continues at Sydney Motorsport Park later this month.

See below for the Race 17 result