Winslow puts one hand on F3 crown with Ipswich win

Winslow puts one hand on F3 crown with Ipswich win 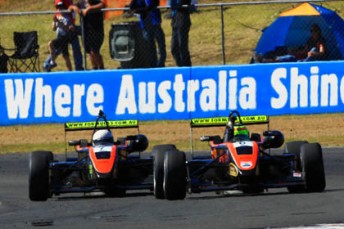 James Winslow has placed all but one hand on his second Formula 3 Australian Drivers’ Championship title after winning today’s first race at Queensland Raceway.

The British driver scored pole and won his 10th race of the season, however it wasn’t all plain sailing for the title leader.

Winslow found himself as low as third in a wild opening lap after team-mate Steel Guiliana and then local hero Chris Gilmour were both able to fight their way past.

Contact between Guiliana and Gilmour at Turn 6 saw Gilmour spin and Guiliana left at the back of the field, handing Winslow the lead which he never surrendered.

In the dying stages of the race, a clutch issue and a shortage of fuel threatened to derail Winslow’s winning run, but he brought the car home safely in the lead.

“We got lucky as we had a clutch issue and it ran out of fuel in the last lap,” he said.

“But it couldn’t have gone better for us, really. We managed to avoid all of that drama on the opening lap and get in front, which is where we stayed.

“The car is really good and very consistent so we’re in a good place for tomorrow.”

Guiliana fought his way back to take second place, passing Jordan Skinner for the runner-up spot.

Gilmour fought to fourth, however was later relegated to sixth place after being served a 10-second penalty for having his front wheel over the grid position marker at the beginning of the race.

Today’s result lifts Winslow’s championship lead to 52 points and, baring incident, is likely to wrap up the title in tomorrow’s two races with just one round remaining.