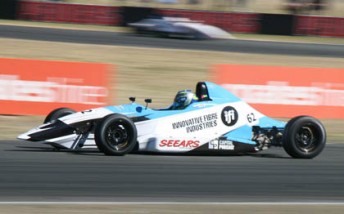 Starting from second position, Hart battled with pole sitter Garry Jacobson through to the mid part of the race before forging ahead to a final victory margin of 4.5 seconds.

Hart, who topped yesterday’s practice, was pleased to continue his fast form.

“It’s a good start to the weekend, I think the consistent pace we had in practice showed through in the race,” Hart said.

“Hopefully for the fans tomorrow it’s a bit closer, but from my perspective, I’m happy to have another race like that.

“The key is to carry a lot of corner exit speed, and after Garry had a small off, I was able to keep my eyes forward.

“It’s pleasing to bounce back after a tough weekend in Townsville.”

Behind the leaders there was carnage at the final turn, with rookie contenders Sam Power, Macauley Jones and Simon Hodge all involved. Power rode over the rear wheel of Jones, with the pair out on the spot, and fortunate to walk away unharmed from their machines.

With Hodge running wide and dropping back to eventually finish in ninth, Anton De Pasquale snuck through to score a personal best result of fifth.

Sixth went to Matt Campbell, who also registered his best result to date, ahead of Jordan Lloyd, and Rhett Noonan, with David Sera rounding out the top 10.

There was also drama on the initial race start, with Ash Quiddington, Luke Fraser and Dylan Richter tangling on the run to the first corner. Quiddington and Fraser were eliminated on the spot.

Two races will be held at the Ipswich circuit tomorrow.