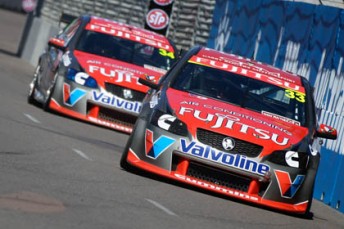 The #33 and #34 Fujitsu Racing Commodores

Garry Rogers Motorsport has officially locked in its driver pairings for the Dick Smith Sandown 500 and the Supercheap Auto Bathurst 1000.

After announcing earlier this year that Greg Ritter and Jack Perkins would drive for the Victorian-based Holden squad, team owner Garry Rogers has confirmed that Ritter will team up with Michael Caruso and Perkins will drive with rookie Frenchman Alexandre Permat.

The Fujitsu-backed team’s decision on its pairings seals the full field for Sandown and Bathurst, save for the #777 Shannons Supercar Showdown entry. That entry’s co-driver for Grant Denyer will be announced the week leading into the Bathurst 1000.

Rogers, who traditionally has left his co-driver pairings fluid until eve of the endurance season, says that the team is pleased with the pairings after conducting most of its co-driver practice with Perkins in #33 and Ritter in #34.

“We would have no reason, other than an interruption to our program, than to run Jack with Alex and Greg with Michael,” Rogers confirmed to Speedcafe.com.

“That’s what we have set out to do, and that’s how we have conducted all of our testing thus far.

“Based on the information we’ve gathered so far, we’ll have no reason to change our plans.”

While Perkins’ extensive experience in both the V8 Supercars Championship and Development Series sees the team well placed to offer Premat maximum seat time in the lead-up to the Sandown and Bathurst races, Rogers argues that the Frenchman should have no problems adapting to the famous mountain circuit.

“The only thing that Bathurst has got is the atmosphere it creates – that’s the difference,” Rogers said.

“At the end of the day, Bathurst is just another race track. If he can’t drive there, maybe I need to give him a whipping! He can drive, so he’ll be just fine.”

See below for Sandown and Bathurst’s endurance driver list