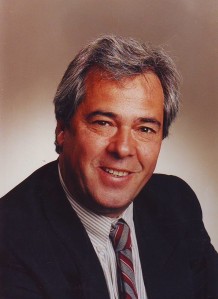 Mike Drewer lived and breathed his dream during the 11 times Adelaide hosted a World Championship Formula One grand prix.

Drewer was the chief of the media department when Adelaide came alive to the screaming sounds of turbo-charged F1 engines for the first time in 1985.

He had served as a television producer with Channel 7 in Adelaide leading up to the November race in 1985, the final race of the F1 Championship.

“I had spent a few years travelling around the UK and Europe and I always had this passion for F1 and I’d gone to quite a few GPs as a punter,” Drewer recalls.

“When all of this happened (Adelaide GP) I approached Mal Hemmerling who was head of the premier’s department and he had been tasked with getting the whole thing together.”

“And I applied for the job and that’s how it started,” says Drewer who started off as a copyboy at the Advertiser before obtaining a cadetship and progressing to work for ABC TV.

When Adelaide’s inner city parklands area was transformed into a temporary race track for the world’s best drivers, Drewer was still pinching himself.

“It was almost a surreal feeling when it actually happened in Adelaide,” Drewer says.

“We (the city) were both naive and confident that we could pull it off without really knowing and really it was like having a tiger by the tail.”

Initially the international F1 media, a crusty, hard-nosed bunch who are not easily wooed and who don’t exactly give out accolades liberally, were won over by the event.

“I think firstly there was a bit of cynicism about the whole thing by some of the national media along the lines of ‘why is this thing in Adelaide’.

“Then all of the international media arrived and of course to them even though it was a new location it was just another grand prix.”

“In fact they felt it was a good event and they led the way to actually recognising it was good.”

“After that first one which was claimed as being the best grand prix it just took off from there.”

Some of the more poignant moments are seared into Drewer’s memory.

“When Nigel Mansell lost his grand prix dream in 1986 I think it was one of the most extraordinary things that I can remember he had that big tyre blow out at the end of the Brabham Straight.”

“I saw him afterwards and he was just like this caged tiger and was walking around in circles looking like an absolutely shattered person.”

“He had lost the World Championship by a mere two points to Alain Prost and it was probably one of the most emotionally charged moments.”

Drewer’s memories of Mansell remain vivid. The Englishman had furnished somewhat of an unwanted reputation within the Williams team.

“I became very good friends with Ann Bradshaw who was the Williams PR lady,” Drewer said.

“I think Williams loved Nige when he was in the car. But when he was out of the car he was a pain in the ass.”

“He just moaned and complained and carried on but when he was in the car he was fantastic.”

“I was at the British GP at Silverstone when he put it on pole and then he beat Senna in the race. Well the crowd went  berserk.” 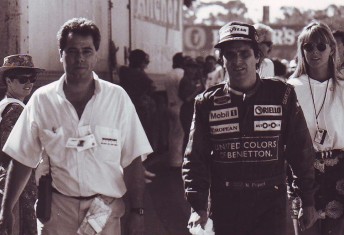 “He was a driver who gave it all and he made it look tough work.”

“You look at drivers now and when they get out of the car they don’t look like they drove down the street.”

Drewer doesn’t have to go digging into the memory bank very far to find colourful passages of Adelaide GP history.

“I remember in 1991 Ayrton Senna coming in when the race was red flagged and he didn’t actually pull into his own garage,” Drewer remembers.

“He pulled up along pit lane and stopped alongside one of the spare garages and not the McLaren garage which was close to the pit exit.”

“Why he did I wasn’t quite sure but we were using this garage for a film crew to base themselves for the race.”

“Anyway it was pouring with rain and he hopped out and went into the garage and Jo Ramirez from McLaren who I got to know pretty well came rushing down and there was this conversation going on.”

“Senna was leading the race and his team-mate Gerhard Berger was running third and it was stopped after 14 laps because the rain was torrential.”

“We were standing around all privvy to this and not really doing much.”

“The next thing is Ramirez gave Senna a new driving suit to change into because he was saturated. Guys from McLaren were drying his car and the whole thing.”

“The fact that he was putting on fresh gear suggested he was going to go back out again.”

“The next thing was that Berger came in and he had changed out of his driving clobber and was in a pair of jeans.”

“Anyway Berger was saying, ‘it’s too wet, Ayrton. Too dangerous to drive’. And Senna was going, ‘yes it’s crazy. It’s too wet’.”

“With that Berger looked at Senna and realised that he was ready to jump in the car again and go racing. I suppose that was typical of the Senna mind games.”

“It was the world’s shortest grand prix and they didn’t get back out again after doing only those 14 laps.”

Beetle George Harrison came to the race and Drewer remembers that dealing with a member of rock and roll royalty was a breeze.

“He just wanted to be one of the punters,” Drewer said.

“I’m not saying it was the first but it was arguably the start of the big celebs going to the races here anyway.”

“One of my other great memories was when the Adelaide GP signed Paul Simon up to be the main act at one of our concerts.”

“Our advertising agency wanted to feature him in one of our promotional commercials.”

“I had been over to Europe for the French and British GPS and I ended up going to Switzerland to do this ad which Simon’s management agreed to.”

“I hired a local film crew and we arranged to meet him at his hotel at 10am. When we asked for him they said ‘oh no Mr Simon is busy he will be with you in a minute’.”

“Well that went on all day. The about 5pm I got a message that he didn’t want to do it but had invited me to his concert that night and we could do it after that.” “It was a great concert mind you and he did sit down afterwards and this ad agency gave me a list of stupid questions to ask him while we filmed. He wasn’t really interested and in the end he said, ‘you are trying to get me to say come on down and buy those tickets’. And I said phew thanks very much but it was bloody hard work to get it.”

The final Adelaide GP in 1995 was filled with mixed emotion for Drewer the rest of the staff at the GP office.

“Adelaide had gone through the period when it was the best but I suppose like most businesses it plateaued a bit.”

“South Australia went through the period where the State Bank collapsed.”

“The Government was getting heavily criticised in the course of normal politics where the premier at the time John Bannon was targetted for his apparent excesses.”

“And the fact that Tim Marcus Clark who was head of the State Bank was on the grand prix board.”

“It became a political football so when it was lost I felt that the event had been targetted politically.”

“All of this got Bernie Ecclestone nervous. And there is no doubt that Ron Walker (influential Liberal Party figure and former Melbourne Lord Mayor who would become the Melbourne GP boss) was looking at getting the race and they saw the opportunity when the grand prix was under the bat in Adelaide.” Mike Drewer in his Cheetah F2

At this time Drewer had been head-hunted along with other Adelaide GP stuff and subsequently bore the brunt of verbal abuse and was tagged in some quarters as being a traitor.

“I’d been approached and I agreed to work in Melbourne when they got the Grand Prix from 1996,” Drewer said.

“It was a difficult decision because I was almost seen by some people as being a traitor.”

“There was almost this feeling of ‘you’ve done a runner’. Yet I didn’t see it that way.”

“I figured the enemy was actually in Adelaide that had been caused politically and was the reason the thing had been lost.”

“I always took the view that Melbourne didn’t pinch it. Rather Adelaide had lost it.”

Drewer worked on the first few Melbourne F1 races and then he was made an offer to return to Adelaide he couldn’t refuse.

“I fielded a phone call from Andrew Daniels who had worked in the finance area of the grand prix office and had told me about this new V8 motor race,” Drewer explains.

“Anyway after a while it was sort of like putting the band back together with all of these ex-grand prix people looking at working on this V8 race. There was probably at least five or six of us who worked on the grand prix in Adelaide who were rounded up by Daniels for this V8 Supercar race.”

“I don’t think it’s egotistical but the reason why the V8s went so well from day one in 1999 is that we did it to grand prix standard.”

“And V8 Supercars for the first time in their life were treated as a serious category.”

“All we did in a meta-physical way was roll those F1 cars out of the sheds and put in V8s.”

These days Drewer still handles the media for the Clipsal 500 as well as the Finke Desert race, the Darwin round of the V8 Supercars as well as an Australian Superbike Championship round at Hidden Valley.

“I guess its motor sport through the centre of Australia which I do.”