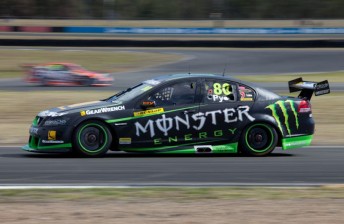 Practice for the Dunlop Series at Queensland Raceway has been completed with Scott Pye recording the fastest time of the day in his Triple Eight Race Engineering Commodore.

Pye, who is also undertaking co-driver practice duties in Lucas Dumbrell Motorsport’s V8 Supercars Championship entry at the Ipswich venue, set a best time of 1:10.71s 30 minutes into the second of the two 40 minute Dunlop sessions.

A 1:11.05s lap was enough to see Walsh top the morning’s running from David Russell and Tim Blanchard.

Pye, who sits fourth in the series standings behind Scott McLaughlin and Chaz Mostert after three rounds, says today’s result is a confidence booster.

“We had a really good base set up which we tweaked throughout the first session. However, we were limited by our tyres which were quite worn and that hurt us a bit.

“During the second session we were able to put on a better set of tyres towards the end and that put us up to P1 which was a great way to end the day.

“To finish another Friday P1 like we did in Townsville is a good confidence booster going into tomorrow’s qualifying and race.”