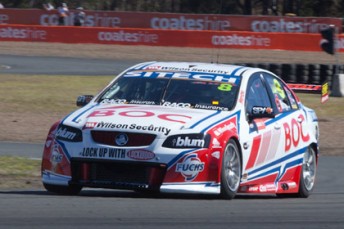 Team BOC’s Andrew Jones has set the pace in the opening practice session for the V8 Supercars Championship teams at the Coates Hire Ipswich 300.

The fastest times in the co-driver only session were largely set in the early minutes, before Jones improved his own previous best effort of 1:11.09s by a scant 0.08s on the #8 Holden’s third and final run.

Nick Percat was second fastest and the end of the half-hour, just 0.17s slower than his fellow Dunlop Series regular.

Warren Luff, David Besnard and Paul Dumbrell completed the top five, while Scott Pye moving to sixth on his last lap of the session.

Sunny but cool conditions greeted the drivers for the opening hit-out of the weekend, with temperatures expected to rise to 21 degrees later in the day.

Jones’ benchmark time proved 0.2s slower than the fastest set in opening practice last year, despite the 3.12km venue having been completely resurfaced between visits.

Dale Wood and Chris Pither both endured difficult runs – the former’s Hiflex Ford suffering a front upright failure, and the latter having his track time slashed due to a leaking left rear axle seal.

The second practice session, for co-drivers and the bottom 50 percent of the championship runners, will kick-off at 1300 this afternoon.

See below for the full Practice 1 times