Ford Performance Racing has burst out of the starting blocks ahead of the Coates Hire Ipswich 300 by taking victory in the team’s challenge section of the V8 Supercar Fun Run today.

FPR’s team of four mechanics took the prize in the race which was one lap of the 3.12km Queensland Raceway circuit.

The outright winner was professional fun-runner Chris Gale who took 10mins43sec to complete the course with the $500 Coates Hire winner’s cheque donated to the Ipswich Hospital Foundation.

One of FPR’s team of drivers, Steve Richards shot into lead appearing to jump before the starter released the field but together with drivers Will Davison and Mark Winterbottom the Ford boys were no match for their crew member colleagues. 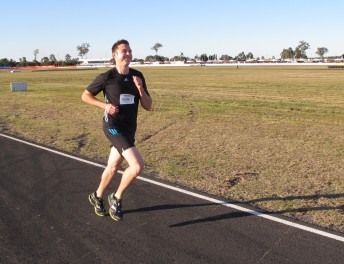 It was a nice hitout for the Kelly drivers who are combining in the enduros.

“The pace was pretty hot but it was good to get up and give back to the hospital so it was for a good cause,” Russell said.

Ricko said: “One thing we take pride as drivers is our fitness. This was good fun on a Thursday with great Queensland weather and a great way to start a weekend.”

Karl Reindler made a dramatic late entry into the race firing onto the track from the pitlane when the leader had made his way into the shadows of the braking area down into turn three.