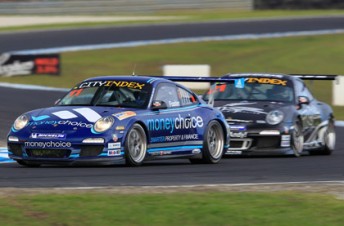 The German marquee is offering one talented youngster from its seven regional Carrera Cup championships a drive in its signature category, which is a support class for the Formula 1 World Championship.

Each nominated driver must be aged 26 or younger and compete full-time in their respective Porsche one-make series, leaving just two Australian Carrera Cup drivers eligible for the initiative – Heimgartner, 17, and Foster, 20.

Coincidentally, these two drivers were involved in a high-speed crash in the last round at Townsville …

The drivers who are selected to fight for the Supercup drive will compete on a race track under identical conditions, displaying their on track ability while demonstrating technical understanding and analytical skills.

The winner will have Porsche cover the majority of the driver’s season budget for the Supercup, in addition to providing long-term training and support from the Porsche Junior drivers programme.

The decision on who will represent the Australian championship will be made by Porsche Cars Australia after the penultimate 2012 Carrera Cup round on the Gold Coast on October 21, 2012.

In addition to the Carrera Cup Australia nomination, talented drivers from Porsche Carrera Cups in Asia, France, Great Britain, Italy, Japan and Scandinavia will also be included in the talent search.

Porsche Motorsport in Germany can also select up to an additional two drivers from the rest of their one-make race series.