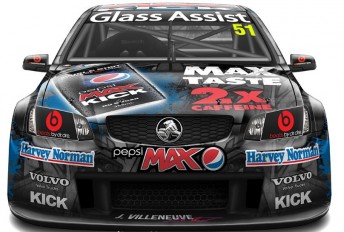 Jacques Villeneuve’s second start with Kelly Racing in the V8 Supercars Championship at this weekend’s Coates Hire Ipswich 300 will coincide with the promotion of a new Pepsi product on the #51 Holden.

The livery, which is the car’s fourth different look of the season, was created by Kelly Racing graphic designer Tim Pattison, and will be run for the next three events.

Villeneuve, who will continue to substitute for the injured Greg Murphy at Queensland Raceway and the following Sydney Motorsport Park event, arrived back in Australia earlier this week and is hoping to improve on a difficult first outing with the team in Townsville.

“It’s great to be able to come back to Australia and team up with the Pepsi Max Crew for the next two rounds and I can’t believe they are changing the design again,” said Villeneuve in a team statement.

“This team really loves to stand out on and off the track and I’m looking forward to doing that in these new colours.”

The Coates Hire Ipswich 300 will get underway on Friday with four practice sessions.