Tim Slade to revert to old Lucky 7 livery for Queensland 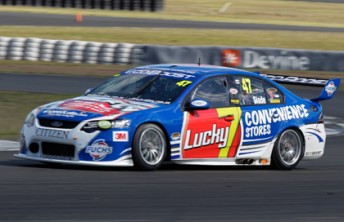 Tim Slade will compete in the Coates Hire 300 at Queensland Raceway with a revised Lucky 7 Racing livery.

To coincide with the end of the ‘Buy 2 Fly’ competition, the doors of Slade’s car will return to the Lucky 7 livery that was launched at the start of the season.

The wording on the doors, however, will be different, with Lucky 7 replacing its slogan ‘The store with more’ to simply say Lucky 7 ‘Convenience Stores.’

According to Lucky 7’s National Brand Manager Craig Matthews, the ‘Buy 2 Fly’ competition has been a success, and is now using the opportunity to reinforce its core business.

“The Buy 2 Fly competition has been a success from our point of view. There’s been a lot of interest with the race fans around the livery change, which has resulted in people coming into our stores,” Matthews said.

“The promotion has also been fundamental in engaging our brand, sponsorship and partners together for the benefit of consumers.

“Now, we revert back to our old livery, but we’re not having our tag line on the side of the car. The reason we’ve dropped it is to reenforce what Lucky 7 is, which has been part of our challenge with the brand. We know that race fans love Lucky 7 Racing, Tim Slade and Stone Brothers, but we often get those same fans asking what Lucky 7 is, so this is about addressing that.”

CLICK HERE for details on entering the ‘Buy 2 Fly’ competition and win a trip for two to Texas to watch a NASCAR race. The competition closes tomorrow.

The Coates Hire 300 at Queensland Raceway kicks off at the Ipswich circuit this Friday.

Next Story Steven Johnson confident for QR despite illness