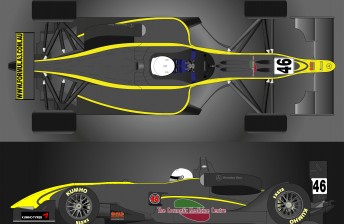 Harvest Motorsport will become the first team to run a new-generation chassis in the Formula 3 Australian Drivers’ Championship when it makes its debut at Queensland Raceway this weekend.

The Melbourne-based squad joins the open-wheel class with a Mercedes-Benz powered Mygale M10, to be driven by experienced F3 campaigner Roman Krumins.

The car was imported several months ago and has been undergoing a testing program at Winton Motor Raceway prior to its first competitive outing.

According to Harvest Motorsport principal Terry Stott, this weekend’s event will finally give the team a chance to gauge the car’s true performance.

“It has been a long time coming but we’re very happy to be able to come to a deal with Roman to make the debut of our car,” said Stott.

“Though Roman has never driven it, we have tested several times at Winton and the car has performed really well. We wanted to make sure that we had an opportunity to run the car away from the pressure of National competition to make sure it all ran smoothly – which it did.

“Queensland is the next step forward in getting the car on track at a race meeting to begin to gauge it against everyone else. Roman did a fantastic job in the Forpark National class last season and has a lot of experience in these cars so should be able to offer some feedback and further direction to help our development on the car and as a team.”

In order to ensure parity with the previous generation vehicles, the 2008-2011 specification carswill run at a mandated 550kg racing weight – a full 10kg heavier than their competitors.

Championship leader James Winslow can theoretically clinch his second CAMS Gold Star award at this weekend’s penultimate event of the season. Winslow needs to outscore reigning champion Chris Gilmour by four or more points across the weekend’s three races in order to take the crown.

Three drivers – Steel Guiliana, Jordan Skinner and John Magro, are covered by three points in the battle for third.