Jimmie Johnson wins at the Brickyard

Jimmie Johnson wins at the Brickyard 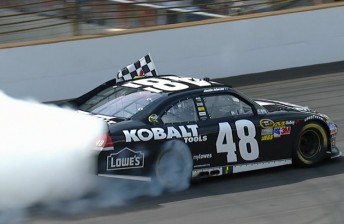 Jimmie Johnson has scored his fourth win at Indianapolis with victory at the Crown Royal presents the Curtiss Shaver 400 at the Brickyard.

The Chevrolet driver passed the Ford of Greg Biffle with 29 laps to go and pulled away as he took the chequered flag.

The 58th victory of his career, Johnson joined teammate Jeff Gordon, as a four-time winner at the famed raceway in NASCAR. It put him in the elite company of Al Unser, Rick Mears and A.J. Foyt who took victory in the Indianapolis 500 open-wheeled race.

“To come here and win is a huge honour,” said Johnson.

“Chad Knaus (crew chief) gave me one heck of a race car today. And pit road was awesome, too. It was a total team effort. We put it on them today. It was nice.”

Kyle Busch finished second, followed by Biffle and Dale Earnhardt Jr., who took over the Sprint Cup points lead after Matt Kenseth was involved in crash triggered by a Joey Logano spin.

“You run in the top five and the top 10 enough, you’ll get enough points,” said Earnhardt.

“But we’d like to win more races. I know our fans would like us to win some more races, too.”

Australia’s Marcos Ambrose ran at times in the high teens, before bringing his Ford home in 20th position to maintain 18th place  in the championship standings.

RESULTS: Crown Royal presents the Curtiss Shaver 400 at the Brickyard