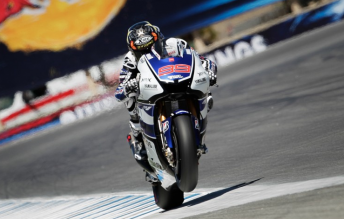 Lorenzo left his pole run until his last lap to take his fourth consecutive pole at the track ahead of Repsol Honda Team’s Casey Stoner, who had posted a new track record just a few laps before.

Completing the front row in third is Stoner’s team-mate Dani Pedrosa, who had shone in yesterday’s practice sessions, but was unable to match the two at the front.

Row two is headed by Lorenzo’s team-mate Ben Spies, who suffered a heavy crash 12 minutes before the end. Despite walking away gingerly, he re-joined for the final few minutes of the session.

Next to Spies will be Monster Yamaha Tech 3’s Cal Crutchlow, who showed no ill signs of his crash yesterday. Crutchlow’s team-mate Andrea Dovizioso rounds out the second row in sixth.