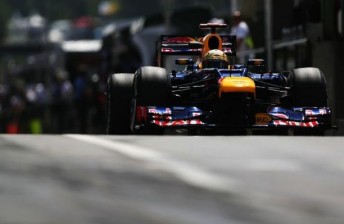 Sebastian Vettel during practice for the Hungarian Grand Prix

The legality of the two RB8s was put under a cloud last weekend at the Hockenheimring when the FIA’s technical delegate requested that the stewards investigate the team’s torque maps, which had seemingly skirted a regulation designed to ensure a linear relationship between throttle peddle position and engine torque.

While the stewards deemed the cars legal, the FIA issued a clarification of the relevant regulations this week ahead of the Hungarian Grand Prix in a bid to avoid a future repeat of the situation.

CLICK HERE for Speedcafe.com’s previous story on the clarified regulations

Renault Sport F1, which supplies engines to Red Bull, Lotus, Williams and Caterham, today issued the following interview transcript with its deputy managing director Rob Bell in order to explain the finer points of the situation.

QUESTION: What is a driver torque map?

ROB BELL: The driver torque map represents the torque requested by the driver as a function of engine speed and accelerator pedal position.

QUESTION: What is an engine torque map?

QUESTION: Are there any regulations that govern how you may control engine torque?

BELL: Yes; this is covered by Articles 5.5 and 5.6 of the technical regulations. The main points are:

– Except for some specific exceptions, the engine torque must be controlled by the driver. These exceptions include: downshifts, pit lane speed limiter, anti-stall function and the end of straight limiter strategy. Note that this list is not exhaustive.

– The driver may only control the torque by means of a single accelerator pedal.

– There are limits on the shape of the torque demand as a function of pedal position and engine speed (to prevent engine characteristics that could be driver aids).

Respecting these restrictions, the torque demand is shaped against throttle position and engine speed to deliver the desired response for the driver and car.

QUESTION: Can maps change from race to race?

BELL: Yes. Driver pedal maps can change as a function of the circuit characteristics. For example, drivers might want more precision during initial pedal application at Monaco. Similarly, some drivers insist on a wet weather pedal map.

The engine torque maps are also adjusted to take account of the engine’s power output according to the ambient conditions. The engines will all produce more torque on a cold day at Silverstone than at Interlagos (low pressure) or Malaysia (high specific humidity). This ensures that the drivers feel the same engine response at part load, regardless of weather.

Torque maps may also change as a consequence of changes to exhausts or air inlet (if teams introduce a new exhaust design or new air box).

This week’s new technical directive from the FIA requires us to submit reference map from one of the first four races of 2012, from which we can only vary ± 2%.

QUESTION: What was the issue with maximum torque in Hockenheim?

BELL: The FIA questioned the magnitude of difference between the maps from Silverstone and Hockenheim, where the maximum engine torque in the mid-range (10000-14000 RPM) was lower.

QUESTION: Why would would you want to generate less torque in the mid revs range?

BELL: The trade-offs concern driveability (the response of the engine to the driver requested torque), acceleration (less torque = less acceleration, except if grip limited) and fuel consumption. In general, reducing the torque is achieved by igniting the fuel later in the cycle by means of the ignition map. This may improve driveability smoothing out the torque curve which may help the driver manage his tyres. This is not in any way a forbidden driver aid or an attempt to mimic the behaviour of a forbidden system (eg closed loop traction control).

Reducing the maximum torque curve increases the amount of exhaust gas produced at lower torque levels very, very slightly, but does not change the exhaust gas flow at full throttle. Furthermore the scope to use the engine to generate exhaust gas is extremely limited by the specific mapping restrictions introduced for the 2012 season also by the performance trade-offs mentioned above.

QUESTION: After first two practice sessions, has this made any difference?

BELL: Not significantly, but the workload for the trackside engineers has increased to ensure we maintain the same level of performance from the engine.