Nicky Hayden to stay at Ducati for 2013

Nicky Hayden to stay at Ducati for 2013 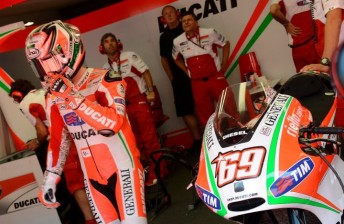 The new deal ensures Hayden a fifth consecutive season riding with the Italian squad, and quashes speculation that the ‘Kentucky Kid’ was set to move down to the World Superbike Championship.

“I’m very happy that I’ll be back with Ducati and back in MotoGP, racing at the highest level for a very important team,” said Hayden, who turns 31 on Monday.

“I love the guys I work with, I love the Ducati fans, and I love the brand. This is an important time for Ducati in a number of ways, and I’m excited that I’ll continue to be a part of it.

“I feel like I’ve got some unfinished business here, and hopefully we can get all the pieces into place and reap the rewards of the hard work we’ve put in the last couple of years.

“It’s nice to be able to make this announcement at Laguna and to share the moment with my fans, friends and family. If I can do a good result on Sunday, it could make for a pretty special birthday weekend.”

Hayden will be hoping to take his first podium of the season in the US Grand Prix this weekend.

The Laguna Seca circuit marks Hayden’s happiest hunting ground, having scored two of his three career Grand Prix victories there while riding for Repsol Honda in 2005 and 2006.