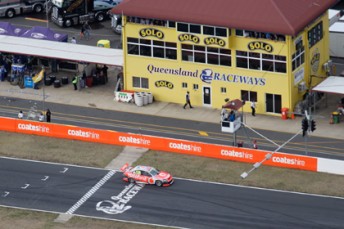 Queensland V8 Supercars teams will hit the track for a test day at Queensland Raceway today.

Dick Johnson Racing, Triple Eight Race Engineering, Tekno Autosports and Stone Brothers Racing will descend the recently resurfaced 3.12km ‘Paperclip’ circuit in what will prove a crucial test in the lead up to next weekend’s Coates Hire 300 at the Ipswich venue.

Due to the implementation of the Car of the Future at the end of this season, testing for each V8 Supercars squad has been reduced. Each team only gets three test days at its nominated test track, plus the one compulsory pre-season day at Sandown (held in February).

For SBR, today will be their third and final test for the year. For Triple Eight, Tekno, this will be their second test at QR, but for Dick Johnson Racing, today marks their first test since Sandown.

All four of DJR’s cars will be there, plus two of their endurance drivers in Alex Davison (partnering James Moffat in the #18 Norton entry) and Paul Morris (pairing with Steve Owen in the VIP Petfoods Falcon).

DJR”s operations manager Scott Jennings says that after his team’s improved showing at Townsville, he hopes the test will continue to steer the famous team in the right direction.

“This is our first time since February that we’ve had the cars out on track without the pressure of a race meeting on us,” Jennings told Speedcafe.com.

“We’ve got a few things we’re going to test, but we’re cautious of making sure that our enduro drivers getting enough laps too.

“We’ll test again before Sandown where our other enduro drivers (Allan Simonsen and Matt Halliday) will get their first laps in our cars.

“We had a pretty strong showing at Townsville, and we want to keep going forward. We want to get better, and we hope this test will continue to point us in the right direction.”

Click back to Speedcafe.com in the morning for the first images of the new look cars.