The list of international drivers who have competed in Australia’s Great Race is as long as a lap of Bathurst itself.

And then there was German royalty.

No it wasn’t heir Schumacher before his F1 fame but His Royal Highness Prince Leopold Von Bayern of Bavaria and of course he drove a BMW.

During the early throes of the Group A formula Prince Leopold was enticed to Bathurst to race in the 1000km race in 1984.

The pair managed to finish 15th, second in class but four laps behind the class-winning TWR Rover.

During the race Channel 7 commentator Garry Wilkinson conducted a live in-car interview with Prince Leopold who kindly declined the first approach as he was negotiating the twisty, fast, undulating and blind corners across the top of the mountain.

He was still gun shy after lunching the black Bimmer during the early practice sessions when he didn’t have the foggiest idea of how to negotiate Australia’s most fearsome racetrack.

Wilkinson then wisely waited until crossing back to the Prince when he was coming down into Forrest’s Elbow where the German would soon breathe a little easier once he had a windscreen full of Conrod Straight.

“I have some great memories of Bathurst,” HRH Leopold told SpeedCafe.

“It was outstanding to go to Bathurst and drive with a Formula One World Champion.”

However Prince Leopold found Bathurst to be no ordinary track.

“I remember Bathurst because it is an interesting circuit. It’s a combination between a circuit and a hillclimb.”

“It’s not very easy to drive and I was there with Denny. I remember I had a very nice welcome from people in Australia because my name is a bit special and also I was a race driver. I had much fun.”

“I only landed two days before and I had to go immediately to Bathurst,” he recalls.

“I thought it was a fast corner but it was a slow corner and I hit the concrete wall.”

“It was before you go in – what is it – The Dipper? And I hit this concrete and I damaged all the cameras which were in front of the lights and it was not an easy experience or a nice experience.”

“Then the mechanics had to work the whole night through to get this car fit again for the race.”

“Then the other thing that was brand-new for me is that I was connected to the TV station via the helicopter to have it (the coverage) more realistic and lively.”

“So I was suddenly asked by the commentator ‘Prince Leopold, how do you like the race?’. And I had to say ‘I’m sorry. I’m very busy at the moment on a hard part of the track’.”

“It was very different for me and then the commentator came back and interviewed me when I was on the big Conrod straight.”

“I had this helicopter flying parallel to me and I remember having a nice interview.”

“It was a new idea to show to the people on TV and it was great to be part of it.” 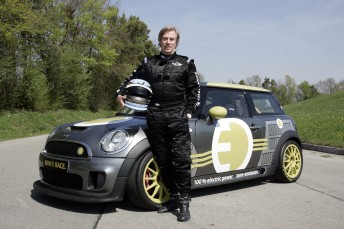 Prince Leopold with the Mini he drove in the 2010 Nurburgring 24-hour race.

The Prince has been a bit of a hell-raiser all his life.

Born in Baden-Wurttemberg, Germany, in 1943, he has always lived life as a thrill-seeker flying planes and helicopters, even jumping out of planes sky-diving and currently competes regularly in historic races.

He maintains a role for BMW as a special ambassador, based in Munich in his home state of Bavaria, which is how SpeedCafe.com came across him during a press preview of the all-new M6 coupe in Spain.

In 1986 Prince Leopold was elevated as a factory driver for BMW and since his retirement from full-time competitive racing in 1998 the propeller-badge as retained him as an adviser.

So what else does he do to occupy his time these days?

“I stopped with the modern cars in ‘98 after driving in the DTM and Le Mans and other series,” he began.

“So first of all, I am a representative of BMW internationally. So I’m going to events like this one showing the new M6.”

“And then I’m also on events showing customers and journalists the new cars. I’m booked for a lot of days with BMW and it’s a great pleasure.”

“But I also do historic races like the Mille Miglia, Goodwood and lots of classic races which are so much fun.”

So do you live in a castle like most royals?

“Not any more. It’s not so comfortable because the castle I was living in has no central heating. It was an old castle with lots of rooms and it was not so cosy.”

“I live now in a little house outside Munich on the Stamberg Lake. I live below a castle there, Castle Berg where King Ludwig II lived before he committed suicide.”

Are you planning to return to Australia?

“I do love Australia very much. It’s such a fantastic country and I really want to come back. And tell me, what about Brocky, Peter Brock, how is he going now?”

On hearing that Brock was tragically killed in a road rally in Western Australia in 2006, the prince was devastated: “That’s awful and I didn’t know this. Now I’m getting goosebumps on my arms.”

“That is very emotional for me and I’m thinking about him as we talk because he was such a special man and so well known in Australia.”