Jim Beam Racing has revealed its return to a white based livery for the remaining rounds of the 2012 V8 Supercars Championship.

After competing with Jim Beam’s ‘Honey’ and ‘Devil’s Cut’ brands on the #17 and #12 cars of Steve Johnson and Dean Fiore respectively, the team has reverted back to the traditional white base. Johnson’s car will carry red stripes, while Fiore’s car will feature gold.

The DJR team revealed its new look at Queensland Raceway today, ahead of its first test day since the pre-season test at Sandown. 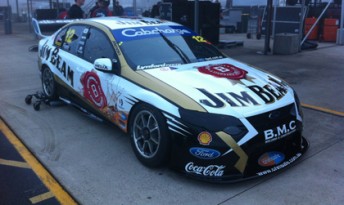 Operations manager Scott Jennings says that he is pleased to have the Dick Johnson Racing Falcons return to their traditional colours.

“I really like the look of the cars. It’s a clean look, and hopefully they go as good as they look.

“I think they look fantastic and It’s good to go back to the white of Jim Beam because they stand out really well.”

The Coates Hire 300 will be held at the Ipswich circuit next weekend.