Commemorative Bathurst Coopers beer to be available in August

Commemorative Bathurst Coopers beer to be available in August 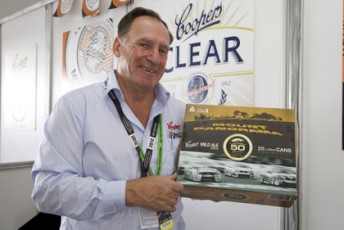 Coopers will celebrate the 50th anniversary of the Bathurst 1000 by producing a limited edition carton of beer.

The South Australian company, a major sponsor of the V8 Supercars Championship, will have the 20-pack beer boxes available for purchase by the end of August.

The cans within the boxes will also have a commemorative look, adding to the collectability of the product.

Coopers is celebrating its 150th birthday this year and chairman Glenn Cooper says that producing the limited edition Bathurst beer boxes and cans is a great way to celebrate the two anniversaries.

“It was a great opportunity, given that we are celebrating 150 years of Coopers this year, and the Bathurst 1000 turns 50 too,” Cooper told Speedcafe.com.

“It has already been a big year of celebrations of the Coopers brand, and it’s great that we’ll be able to continue those celebrations at Mount Panorama.

“Now that we’ve ended up being Australia’s only locally-owned major brewery, combined with an iconic Australian product like V8 Supercars, the match was terrific. I couldn’t have written the script any better. It is a perfect match.”

Cooper says that the product should be available by the end of August ahead of the 50th running of ‘The Great Race’ on October 4-7.