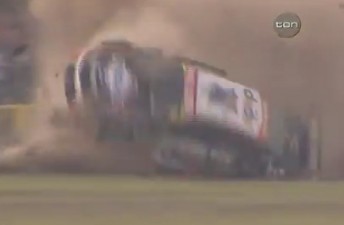 Jason Richards’ roll over in 2005 at Queensland Raceway

The V8 Supercars return to Queensland Raceway next weekend for the Coates Hire 300.

Built in 1999, the 3.12km circuit has produced some of V8 Supercars most memorable moments, even though the general feeling towards the flat, six turn layout is often a negative one.

The team at Speedcafe.com has selected seven of its favourite moments from the past 14 years at the ‘Paperclip.’ What is your favourite moment at the Queensland Raceway circuit?

See below for a selection of videos of Speedcafe.com’s QR selections, and your chance to vote in the latest edition of Speedcafe’s Pirtek Poll.

Jason Richards massive roll over in 2005

Russell Ingall takes out Mike Imrie at the finish line