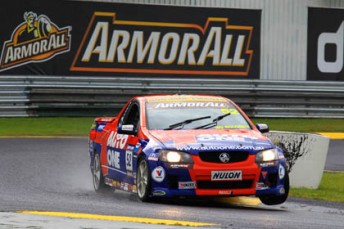 Tony Longhurst will make a return to the V8 Utes Series, and Mount Panorama, this October.

The two-time Bathurst 1000 winner will compete as the Auto One wildcard in Round 4 of the Auto One V8 Ute Racing Series – protected by Armor All.

Longhurst, a former Australian water skiing speed record holder, drove a V8 Ute at the 10 Years of Legends event at the Clipsal 500 in 2010 before jumping behind the wheel of the Auto One Wildcard Ute at Sandown Raceway last year.

After testing the car at Eastern Creek last week, Longhurst is keen to improve on his past performances in the class.

“The car felt really good at Eastern Creek. There were a few changes to the car this time with the new shocks and I felt a lot more at home,” Longhurst said.

“It was hard last year at Sandown only getting 20 minutes sessions and I’m feeling much more comfortable now and I don’t want to run up the back this year.

“It’s such a competitive competition with such good drivers now, I’m keen as can be and can’t wait to get to Bathurst. Bathurst is my favourite circuit, I’ve done well there in the past and hopefully can do it again.”

Longhurst won his first Bathurst 1000 in 1988 with Tomas Mezera in a Ford Sierra, and again in 2001 with Mark Skaife driving for the Holden Racing Team. Longhurst claimed a third Bathurst win in the 2009 Bathurst 12 Hour with Damien White and Rod Salmon in a Mitsubishi EVO X.