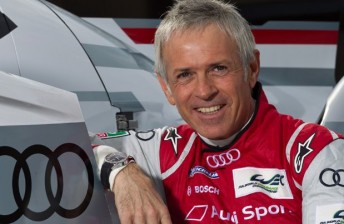 The 48-year-old Italian has been a mainstay of Audi’s sportscar program over the last 14 years, driving alongside Tom Kristensen and Allan McNish at Le Mans for the last seven consecutive Le Mans races.

Capello has recorded 10 outright podiums from his 14 Le Mans starts, including a second place finish this year.

Outside of Le Mans, Capello’s achievements include two American Le Mans Series victories and five successes in the Sebring 12 Hour.

Capello, McNish and Kristensen currently lead the World Endurance Championship points standings after three rounds, with the Dane and the Scot to complete the season as a two-driver effort.

While Capello plans to continue competing with Audi in GT3 competition, he says the time is right to step back from the company’s LMP1 program.

“I would like to address a really, really big thank you to Audi on my part,” said Capello in an Audi statement.

“Audi has become my brand – professionally and based on my personal conviction. Together, we have achieved so much and demonstrated pioneering achievements again and again. Naturally, there is a feeling of sadness too, as this departure from the factory team is not easy.

“I am saying goodbye with a clear conscience because I have no unfinished business with my sport.

“In all disciplines and categories, Audi and I together have achieved the maximum with victories and titles. As late as in March, we won at Sebring and I’m currently ranking in first place of the WEC standings. I wanted to quit at a time when I was still able to show top performances.”

The 2012 WEC continues with the 6 Hours of Silverstone on August 26.