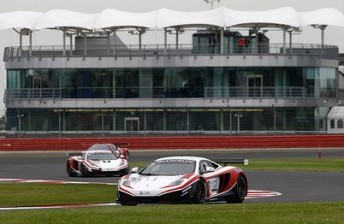 David Brabham’s season in the Blancpain Endurance Series has ended abruptly with United Autosport announcing that it has withdrawn from the class with immediate effect.

The Anglo-American team says it will spend the rest of the year undertaking an extensive test program with its McLaren MP4-12Cs before moving them to the British GT Championship in 2013. The squad currently competes in British GT with an Audi R8.

The team says its plans to race in the 2013 Bathurst 12 Hour in February remain unchanged by the decision.

Brabham had joined United Autosport this year for its inaugural BES assault with the new McLarens.

Lean results for both its Brabham/Alvaro Parente/Matt Bell and Pro Cup and Mark Blundell/Zak Brown/Mark Patterson Pro-Am Cup entries however have seen the cars withdrawn.

“After an unrepresentative season in the Blancpain Endurance Series, United Autosports have taken the decision to withdraw their entry from the series with immediate effect,” read a team statement.

“After careful analysis of the existing package, the team decided it was in their best interest to focus their energy on an intensive period of testing and development to better understand the intricacies of the cars.

“To create a strong platform from which to launch their 2013 campaign, United’s MP4-12Cs will appear in rounds of the British GT Championship later this year.”

Brabham meanwhile expressed his disappointment over the end of the team’s BES campaign via social networking website Twitter.

“Sad not to be racing for United Autosportagain this year. 100% behind the decision though,” he wrote.

Brabham will now focus on his World Endurance Championship campaign with the JRM HPD outfit.