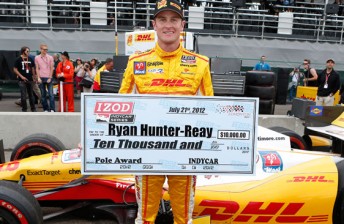 IndyCar points leader Ryan Hunter-Reay has taken the bonus point for winning pole, but will start the 75-lap Edmonton Indy from 11th due to an engine change heading into the weekend.

Hunter-Reay had won the previous three races, but his team took the decision to change the Chevrolet powerplant after his team-mate James Hinchcliffe had his engine drop power in Toronto two weeks ago.

A determined Hunter-Reay scored his first pole of the season and second of his IndyCar career with a best lap of 1:17.2338 in the final session on the 3.58-kilometre, 13-turn City Centre Airport circuit.

“I am really happy with that pole,” said Hunter-Reay.

“The track was constantly changing throughout the sessions (because of rain), and putting on a clear visor helped so I could see the wet spots.

“We hadn’t been on a wet track all weekend so it was kind of a guess on what (racing) line to use. These cars have very little give in them – going over the bumps and when it is wet it is very tricky.

“It was great we picked up a championship point for the DHL/Dr Pepper team, but too bad we will be staring 11th instead of first because of the engine change. Tomorrow will be really interesting for everyone.”

Dario Franchitti, who started from the pole in each of Hunter-Reay’s victories, will share Row 1 with Australia’s Ryan Briscoe. Takuma Sato, the 2011 pole winner, and Alex Tagliani will be on Row 2, while Helio Castroneves and Australia’s Will Power will occupy Row 3.

Power blistered the track record in the first round of qualifying. However, the 2011 and ’09 race winner was bumped in the second round as rain pelted the eastern edge (Turns 1-4), which prompted crews to switch to the intermediate rain tyre. On the final lap of the 10-minute session, Power missed the cut by .0285 of a second to Hunter-Reay.

* 10 spot grid penalty to be applied prior to start

Check out the video from the Firestone Fast 6

Here are the interviews with the top drivers