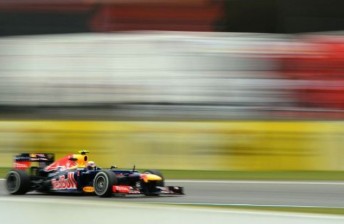 Mark Webber during practice at Hockenheim

Mark Webber has been handed a five-place grid penalty for tomorrow’s German Grand Prix at Hockenheim after his Red Bull team elected to change the gearbox in his RB8.

The Australian’s crew used the first of its four annual curfew ‘jokers’ at the circuit on Friday night in order to investigate an issue with the gearbox, which it eventually elected to change.

Webber had endured two low-key practice sessions on Friday, ending up 20th on the time sheets in the morning before going ninth in the rain-hit afternoon session.

“We haven’t done much dry running yet, but Sunday looks like it will be better weather-wise,” said Webber after practice.

“We needed to check what the track conditions were like in terms of grip level, as it’s a different layout here to Silverstone and different asphalt.

“We tried a few small new parts. The lap times were all over the place and there were a few incidents, but we got everything we could out of that session.”

A third and final practice session will take place at 1100 local time today ahead of qualifying at 1400.