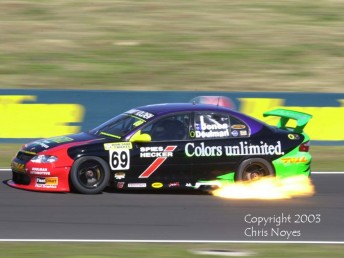 Peter Doulman and his regular sidekick John Cotter were a popular pairing at Bathurst through the 1990’s.

The former two-litre BMW M3 drivers would go on to regularly combine in a Commodore in the Great Race and while they saw a lot of the back of the field and not too many checkered flags they were no less admired by the touring car fraternity.

They were the privateer pairing who everyone rooted for because they were good blokes, fronting up year after year and toiling hard against hard-nosed cashed up factory operations.

For Doulman the lure of racing started as a kid growing up in Bathurst.

“Well I’m originally from Bathurst and I went to primary school on Mt Panorama,” Doulman begins.

“And I wasn’t particularly clever at it because every time the Easter and October races would arrive I would disappear from school.”

“I didn’t get smart enough because there was one big post on Murray’s Corner which I always used to go and sit on and the nuns used to know exactly where to find me.”

“I should have changed my position so they couldn’t find me but I would get an hour or so of watching the racing in before they would know I was missing.”

The racing bug had bitten early and being the son of farming parents Doulman was taught how to handle machinery at a tender age.

“I could drive a tractor when I was eight or 10 and did all the paddock bashing stuff.”

“I joined the Bathurst Light Car Club when I was 11. I think I was the youngest member they ever had and in those days you had to have a road licence to compete.”

“But I managed to win the club championship twice before I was officially recognised for it after starting out in about 1971.”

“They used to let me run and turn a blind eye to the fact that I didn’t have a road licence.”

“Then I won it the year I turned 17 in 1974. So I was hillclimbing and doing motorkhanas and I was fortunate because they were all my brother’s cars who was a petrolhead. He had a brand spanking new XU1 which he used to let me drive in hillclimbs and a Cooper S.”

Doulman, who graduated from university with an engineering degree, started punting around in BMW touring cars in the late 1980’s. 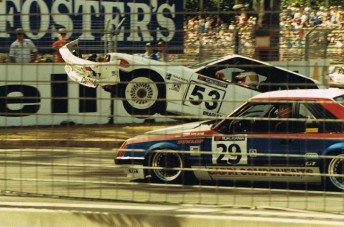 Doulman gets some air at the 1989 Adelaide GP

From 1989 to 2003 Doulman was a regular at Bathurst which also included one fling at the 12-hour when that race was briefly run at the mountain track.

“I mainly did Bathurst with John Cotter but I also had starts with John Faulkner and Robbie Jones (his final Bathurst start in 2003).”

And then there was the unplanned run with Allan Grice, the 1986 and 1990 Bathurst winner.

“We’d entered our car, a VT Commodore with Bob McDonald in 2002 as one of the wildcard entries,” Doulman recalls.

“There was also the Konica race on the Saturday for the privateers but Bob couldn’t qualify and cut a good enough time so I ended up running in that race just for a bit of fun.”

“Gricey was running an AU Falcon there in the 1000 and just as I finished my race and got out of the car a couple of his guys ran over and grabbed me and said ‘you’ve got to come up and see Gricey’.”

“Anyway apparently Gricey had been up to see the stewards and it turned out his co-driver Ross Halliday couldn’t qualify either.”

“So he got permission to put me in his car and I thought, ‘well guys, this is Saturday afternoon and I’ve never driven this bloody thing before. I didn’t know what it was like and I didn’t fancy going out there and being a mobile chicane’.”

Anyway Gricey said ‘come on Pete it will be easy’. His words were ‘she’s a good old girl and she could tow a caravan across the top of the mountain and still do a 14 (2mins14sec),” he chuckled.

“They plonked the new race engine in it on Saturday afternoon and Allan went out and did a couple of laps to make sure it was okay but it kept overheating.”

Doulman would not handle the car until the Sunday morning warm-up and that’s when it became blatantly obvious the Falcon had developed a serious problem.

“I went out in the warm-up and on about my third lap I looked at the lap time and it was about a 24 or 25 and I thought ‘hell I’m nowhere here’.”

“So I started leaning on it and I did a 21 and brought it back in and said, ‘mate this thing is a piece of s..t. It’s running on seven cylinders’.”

“I was changing gear 300m later than I was in my VT the day before and that thing wasn’t a jet.”

“Come the start of the race Gricey came straight back into the pits after the warm up lap and said to the guys, ‘this thing is on seven cylinders and I said to Al ‘well I told them that three hours ago’.”

“Allan ended up starting and did a lap and then came in and that went on for a bit and they couldn’t fix it.”

“When he got out of the car he slapped me on the back and said, ‘tell you what Pete. A 21 on seven cylinders around here is okay’.”

Through the 1990’s the Doulman and Cotter garage used to be a popular place for officials, rival teams and journos always fanging for a free feed.

“The Allens confectionery company was one of our sponsors. In hindsight they got a hell of a lot for not so much money but that is probably a typical story in motor racing.”

“There wasn’t a lot of money involved but it was something we pursued even after they didn’t pay us any money. They were still happy to supply us with lollies.”

“We had built somewhat of a reputation not just with the fans but with all the other drivers, all the other teams and particularly all the marshals.”

“The funny thing about it was, we could get access anywhere we wanted.”

“At Bathurst or the Adelaide and Melbourne grands prix you could not get into race control unless you were summoned by Tim Schenken and he was going to shoot you or something.”

“But carrying a lolly bucket I could walk in anywhere I liked even at the grand prix.”

“Allens would give us 40kg of lollies, an assortment of jelly babies, snakes, milk bottles, sherberts etc per meeting.”

These days while Doulman is not involved he is aware that the type of camaraderie the M3 Motorsport team espoused has withered on the vine.

“It seems to have gone these days and teams, for want of a better word, seem to be up themselves.” 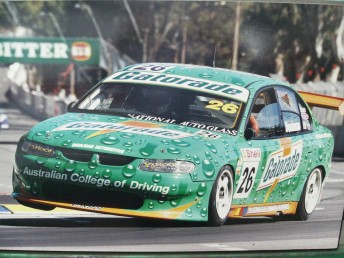 Doulman in the Gatorade Commodore at the 2000 Clipsal 500

Links to the Doulman and Cotter days still linger in V8 Supercars with many teams fielding ex-Doulman/Cotter crew members.

“We almost gained the reputation of the team that trained the crews, so much so that the rumour was we were ‘The Doulman Academy of Motorsport’,” he laughs.

Do you miss it?

“I miss all the camaraderie we had but I don’t miss loosing all the money,” he confesses.

“Back in our day regardless of what everyone said, people were still pouring in a shitload of their own money.”

“My biggest regret is that I didn’t get to have a drive with my son Grant in a V8 Supercar.”

“Grant is 25 and I think he realises now he’s probably a bit too old to break into the top grade.”

“He started racing Formula Fords when he was 16 and he was a bit erratic and inconsistent but he was fast.”

“The problem was that he never raced in karts before that because he was always at the track with dad.”

Doulman’s old team manager Simon Copping, who runs the automotive business in Sydney, revived an old sports sedan a few years ago together with his boss.

“It was an old VK and Simon ended up winning the NSW Sports Sedan Championship three or four times in recent years. Then Grant took it over and he won last year in that car.”

“Simon is now running an old V8 Supercar in the State Sports Sedan Championship this year after debuting it last year.”

“It is an ex-Perkins VZ Jack Daniels car from 2006 and Simon finished second last year in it, missing by a couple of points because he blew a tyre in the last race.”

These days Doulman has branched out in the business world, taking the plunge into LED lighting.

“Simon still runs the automotive side of the empire for want of a better word and I’ve branched out into the LEDs mainly on the industrial side.”

“That’s gone nuts as you could imagine with the carbon tax and electricity prices so that’s keeping us more than busy.”