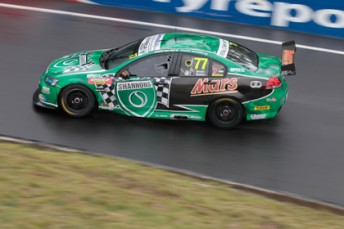 National-level Australian race team Minda Motorsport has been selected to prepare the Shannons Supercar Showdown entry in the Supercheap Auto Bathurst 1000 this year.

Minda will take on all preparation and engineering responsibilities of the Shannons Insurance-backed Commodore, to be driven by the host of the reality TV program Grant Denyer and the winner of the program.

The Shannons Supercar Showdown will see 10 drivers go head-to-head in the unique TV show, with the winner securing the drive in classic October race.

This year, Kelly Racing has elected to relieve its own team of the preparation work, mainly due to not having an available chassis of its own.

Minda, owned and operated by Bruin Beasley, will prepare the Walkinshaw Racing-built Commodore chassis which is being leased from Lucas Dumbrell Motorsport. The WR04 chassis is the car that Garth Tander took to the 2007 V8 Supercars Championship.

The car will be engineered by current Minda employee and former Kelly Racing engineer Barry Ryan.

Kelly Racing driver and owner Rick Kelly says that Minda will be in control of the Supercar Showdown entry, but his team will come across it where necessary.

“We spoke to a lot of teams to talk about running the car, and in our opinion, Minda was the best option for us,” Kelly told Speedcafe.com.

“They’ll run the car with some assistance from us. We’ll make sure that the entry is given the best opportunity, and we know that Bruin and the guys will provide us with that, but any assistance that we need to provide, we’ll be happy to give.”

While Minda may be less experienced than Kelly Racing, Rick Kelly is sure the team, car and engineer combination will be more than adequate for Denyer and the competition winner.

“It’s a Walkinshaw car, it’s got quite good history, it has got fresh commentary and has been put together well,” Kelly said.

“We want a car that’s speedy, but really reliable so the two drivers can do a really solid job.

“Barry Ryan will run the car and his Bathurst experience is second to none. We feel that the Supercar Showdown team will be in very good hands for Bathurst.”

The second-running of the Supercar Showdown begins this Monday on 7mate at 6.30pm. An episode of the show will air at the same time each week until the Monday before Bathurst where the winner will be revealed.