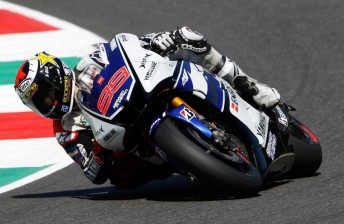 The pair were split by just 0.1s at the end of a day where the Repsol Honda riders trialled the company’s 2013 development chassis.

It was a difficult test for Rossi, who fell in the early afternoon before electronic issues saw him sit out the remainder of the day.

The Italian team had been experimenting with engine modifications on its bikes in a bid to improve corner exit speeds.

Ben Spies did not take part in the day’s running as he continues to suffer from the food poisoning that hampered his efforts in Sunday’s Grand Prix.