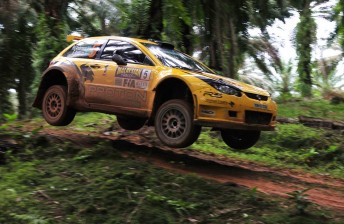 PG Andersson out front in Malaysia

Sweden’s PG Andersson holds the lead in the Malaysian Rally, the fourth round of the Asia Pacific Rally Championship.

“Tough day at the office, had an early lead, and looked to be on the right tyre. Then had a pipe burst and lost all the coolant,” said Atkinson on Twitter.

“Trying to make it back up higher into the points. Making progress but lost a bit when the Power Steering failed.”

Gill was also fortunate to complete the day after colliding with a tree early in the day.

Here is the news clip from the day