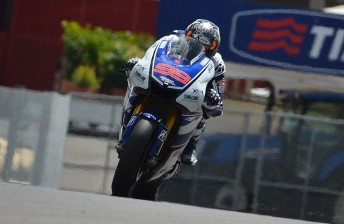 MotoGP championship leader Jorge Lorenzo has been the man to catch in Friday practice for the Grand Prix of Italy at the Mugello circuit.

The Yamaha Factory Racing rider set the fastest times in both morning and afternoon practice setting an impressive record beating 1:48.076 lap and remaining unchallenged at the top of the timesheets.

“I’m really happy because from the beginning we’ve been quite fast,” said Lorenzo.

“We haven’t had to make many changes to the bike, the feeling is great with the track and it’s working well. I feel good with the suspension, throttle and braking.

“Everything seems quite clear, we have to work on some small details but we’ve made an excellent beginning.”

The defending race winner was fastest ahead of Honda’s Dani Pedrosa and Nicky Hayden on a Ducati. Australia’s Casey Stoner was sixth.

“We haven’t had a great day and aren’t too impressed with our pace on the bike,” said Stoner.

“This morning we began very far off the pace and slowly made our way forward. This afternoon we were trying to get the hard tyre to work, but every time we went out it didn’t work so we came back in to try something different and then go back out but it was still the same.

“We can’t seem to get the same tyre temperatures that the others are getting at the moment, we’re trying to find it through different set ups, but we haven’t found it just yet.

“We have some thinking to do tonight and will try to come back tomorrow with something different.”