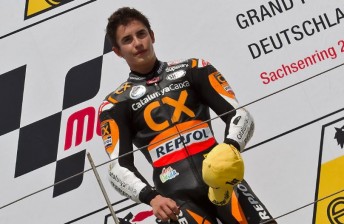 Marc Marquez on the podium last weekend in Germany

Repsol Honda has confirmed that Moto2 rider Marc Marquez will join fellow Spaniard Dani Pedrosa for its assault on the 2013 MotoGP World Championship.

Marquez currently leads the Moto2 points standings, and will be drafted into the team to replace the retiring Australian Casey Stoner.

Marquez and Pedrosa have both signed two-year deals – extending the latter’s stay at the factory team that began in 2006.

Honda’s announcement follows last month’s confirmation from series organisers Dorna that the rule preventing riders from entering the premier class in factory teams would be dropped.

Marquez says that signing with Repsol Honda is a dream come true.

“To reach MotoGP next season with Repsol Honda is a dream come true and I want to thank HRC for their confidence in me,” said the 19-year-old Spaniard.

“I am very proud to be a part of the big Honda family for the future and I don’t want to forget all the people have helped me since I began to ride motorbikes.

“Now my focus is on Moto2 where my team and I are working very hard and we are excited to achieve our goal, which is to win the World Championship in 2012.”

The announcement ends speculation that Valentino Rossi was a possibility to leave Ducati at the conclusion of the season in favour of a return to his original MotoGP home.

Fellow former World Champion Jorge Lorenzo is already confirmed at Yamaha for 2013 having declined an offer from Honda.