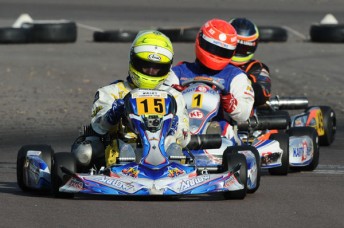 Competing in the highly competitive Clubman Heavy category, Wall emerged as the victor following a frantic 16-lap final. He crossed the line 0.079 seconds ahead of outgoing champion Kip Foster.

“This is my 11th National Championship and it feels just as good as my first in 1997,” said Wall.

“Every nationals is hard to get, I had a lot of luck these nationals. I had the pace all weekend and can’t thank enough the guys in that race who made it clean, it could have turned nasty at any moment as we were racing pretty hard.

“Clubman Heavy has got some of the most experienced drivers in Australian karting, any one of the top six could have won that race – I was just fortunate that it was me.”

“Without Shamick Racing I wouldn’t be here, along with all of the support from my parents and Anthony Bartolo from J&A Tuning.”

John Pizarro leads the all-time winners list with 15 national championships to his name during his illustrious career – three clear of Peter Ward and David Sera on 12 wins a piece.

Nelson and Lee Mitchener raced wheel-to-wheel over the last few laps before Mitchener made one last gasp to steal the win entering the fast esses on the back section of the circuit. When the pair touched wheels it sent Mitchener spiraling through the air at high speed, while out of the race, he emerged uninjured from the incident – the same couldn’t be said for his Tony Kart. 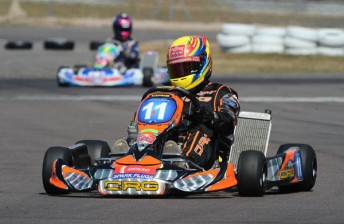 Pierce Lehane on his way to victory in Leopard Light (Pic: AF Images/Budd)

Finishing third was Cian Fothergill ahead of Nathan Davis and Chris Farkas.

Queenslander Scott Simpson was unstoppable on his way to victory in the Clubman Super Heavy category. Simpson claimed the fifth national championship of his career ahead of Ben McKinlay who charged back into contention after a lap one incident dropped him down the order.

Western Australia drivers filled the podium in the Junior National Heavy category with James Allen emerging from the last lap chaos to cross the line first. Nicholas Rowe finished second ahead of Jesse Elliott. However, this result remains provisional pending the outcome of an appeal of a post-race technical inspection.

South Australian Luke Marquis left no doubt who was the Australian Champion in the Junior National Light category.

Marquis was dominant on his way to claiming the win ahead of local favourite Bryce Fullwood, who charged his way from 15th position on the grid due to an incident in the pre-final.