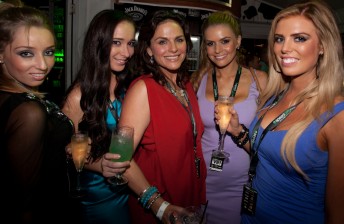 The second-annual Speedcafe.com Greenroom at Townsville has been deemed a success, with V8 Supercars drivers, teams, sponsors and fans enjoying a post-event party.

The Bottle-O Racing’s Reynolds, who scored his first pole position in today’s V8 Supercars race, says that the Greenroom was the perfect way to wind down after a big weekend.

“Man, this is a cool party,” Reynolds told Speedcafe.com.

“We had a pretty good weekend on the track. We would have liked a podium, but we’re pretty happy with fifth place today, and my first pole position.

“And there’s no better way to kick back after the racing in the Greenroom.

“One of the best things about Townsville is Speedcafe’s after party. It’s always a lot of fun with a lot of cool stuff going on and great way for the entire V8 Supercars paddock relax at the midway point of the season.”

Stay tuned to Speedcafe.com for the latest news from Australian and international motorsport, plus your chance to attend future Greenroom after parties …

See below for Speedcafe.com’s photo gallery from the Greenroom in Townsville.