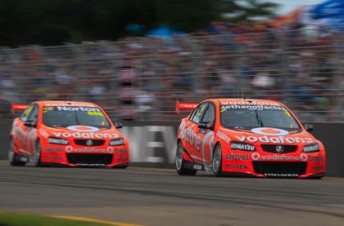 Jamie Whincup has admitted to racing team-mate Craig Lowndes harder than ever before in order to win Race 15 of the V8 Supercars Championship on the streets of Townsville.

Whincup, who started from ninth on the gird, won the race by just 1s from the second TeamVodafone entry after an intense 28 lap final-stint battle.

The duo had manage to jump ahead of their three Ford Performance Racing rivals during the second and final pitstop cycle.

Lowndes twice made his way past Whincup in the run to the flag, only to find his fellow three-time champion repaying the favour at the following corner on both occassions.

“That was a cracker race – I’ve never raced Craig so hard,” said Whincup, who was passed by Lowndes for the win in the closing stages of Race 13 at the preceding event at Hidden Valley

“We had great cars in Darwin and I was a little soft then so I thought this time around I’ll give it a good crack and we’ll race hard, but fair.

“We had a cracking battle with two good cars (that had) tyres wearing out. We were hanging it off the walls, it was all good stuff and a fantastic credit to the team.”

Whincup eked out much of his final winning margin over the last three laps, but doesn’t believe he had much in hand over his team-mate.

“The (two) cars were pretty similar,” he said.

“Craig had great speed through the second chicane. I think I better have a look at the video on that one, he was killing me through there!

“But it was a good hard, clean battle and I couldn’t be happier. We’re starting to get some results and some race wins and we’ll be pushing hard to try and keep the tempo during this mini break.”

Despite missing out on the podium’s top step, Lowndes said he also enjoyed the fight.

“We gave each other room but we were fighting pretty hard,” he said.

“It was a great finish. I was very happy that we had the pace over the rest of the field to pull a gap on third-placed Will (Davison). That meant we could go off and have our own battle.”

Bizarrely, Lowndes had led Whincup through the majority of the race until losing the place when his pitlane speed limiter momentarily became active late in the second stint.

“I don’t know what happened,” said Lowndes of the limiter incident.

“I just went into Turn 11 and it came on. I’ve knocked it somehow, but we’ll have to have a look why.”

Whincup’s victory is TeamVodafone’s sixth of the season and fourth in succession.

Whincup now holds a 100 point lead over Mark Winterbottom in the championship standings, with Will Davison another 40 adrift in third.

Lowndes meanwhile continues to hold down fourth – 298 points down on Whincup.