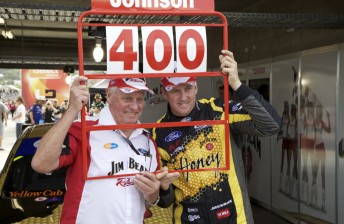 Steve Johnson will make his 400th V8 Supercars race start at the Sucrogen Townsville 400, and he acknowledges it as a huge personal achievement.

Johnson made his first start in the class at Oran Park in 1994, driving a Fuddruckers-backed Falcon, prepared by Dick Johnson Racing.

Since then, he has scored three race wins, including the 2001 Queensland 500 with Paul Radisich. In that same year, he scored his best championship result of fifth.

Johnson says that he is proud to have passed the milestone race start mark.

“I didn’t actually realise. I’m not much of a statistics person,” Johnson told Speedcafe.com.

“It’s still a privilege for me to be hear.”

“You get a few highlights here and there. Certainly, the 1999 Bathurst with Dad, just missing out on the podium in fourth,” he said.

“But also, the 2007 Bathurst 1000 was amazing. We finished third but it was amazing finish after such a hard day.”