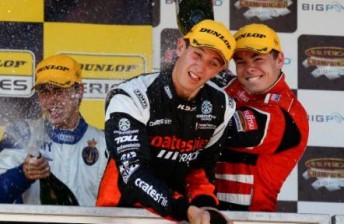 From left: Mostert, Percat and McLaughlin

Scott McLaughlin has secured his second consecutive Dunlop Series round victory by finishing second in the third and final race at the Sucrogen Townsville 400.

Nick Percat was the class of the Race 3 field – launching off the front-row of the grid to take a lead he would never lose.

McLaughlin spent much of the race holding Chaz Mostert at bay. The pair made nose-to-tail contact on several occasions, eventually greeting the chequered flag a full 10s adrift of Percat.

The results ensured that Percat and Mostert would join McLaughlin on the round podium.

Ash Walsh ran as high as third early in the race but failed to finish after a spin being pursued by Mostert caused significant damage to the back of the Simpro Ford.

Andrew Jones was also on the retirements list after suffering damage in a Turn 2 concertina incident involving Brett Stewart and Rodney Jane.

Luke Youlden was the last of the classified runners in 20th after enduring an early incident of his own with David Russell.

The Dunlop Series now moves to Queensland Raceway for the Coates Hire Ipswich 300 on August 3-5.